The LCMS-9050 provides excellent performance thanks to Shimadzu’s proprietary patented technology inherited from the LCMS series. The system is equipped with technology mainly inherited from the LCMS-8000 series, from the injection unit to the ion separator. Ions are efficiently injected into the TOF unit thanks to the bright ion optical system and high ion convergence. At the TOF unit, the precision temperature control system inhibits mass accuracy variations caused by external factors. The heater and temperature sensor are arranged at the optimal flight tube positions, providing highly accurate and robust temperature control. In addition, the electrical system controlling the flight tube is temperature controlled to achieve high mass stability. 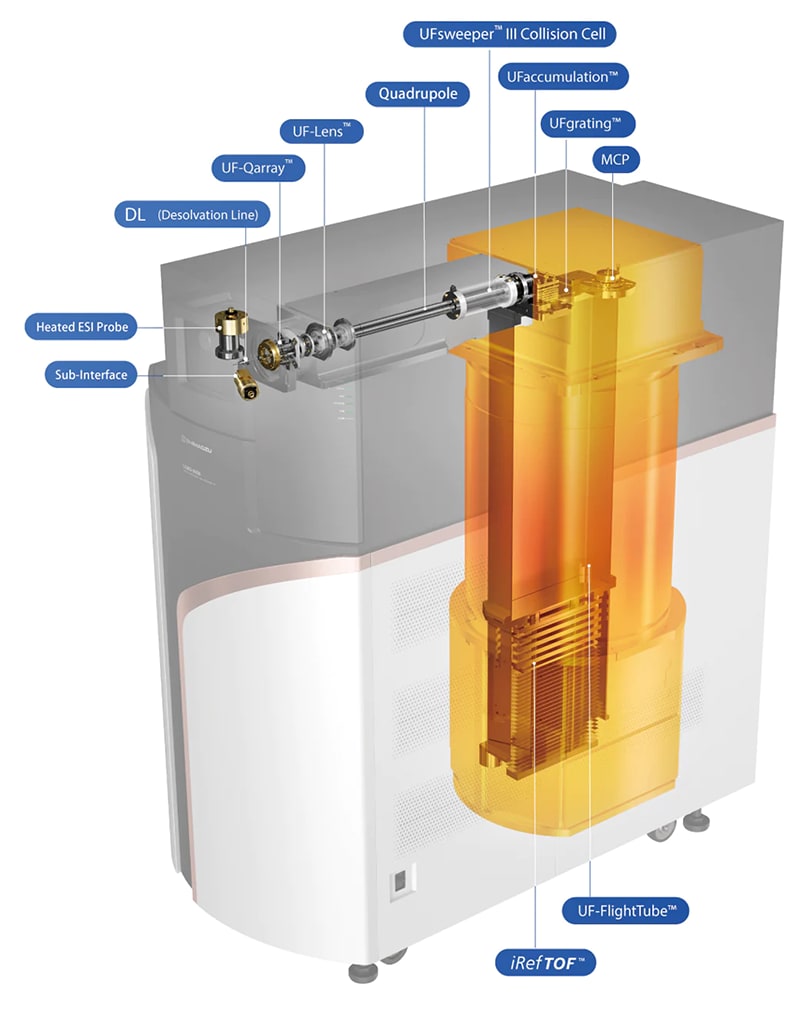 The precision-controlled temperature control system minimizes the effects of room temperature variations, so the LCMS-9050 provides extremely stable mass accuracy. For this reason, the system can be used to measure accurate mass values easily, without worrying about mass calibration. In addition, the time and effort expended to date on frequent mass calibration can be reduced.

Under usual laboratory conditions, six antibiotics (with molecular weights between 265 and 1203 Da) were consecutively analyzed, and the mass error against the theoretical values was plotted. When the compounds were analyzed three at a time in positive ion mode and negative ion mode, the mass accuracy was stable with accurate mass values for all compounds to within ± 2 ppm of the theoretical values without calibrating mass even once in 72 hours. 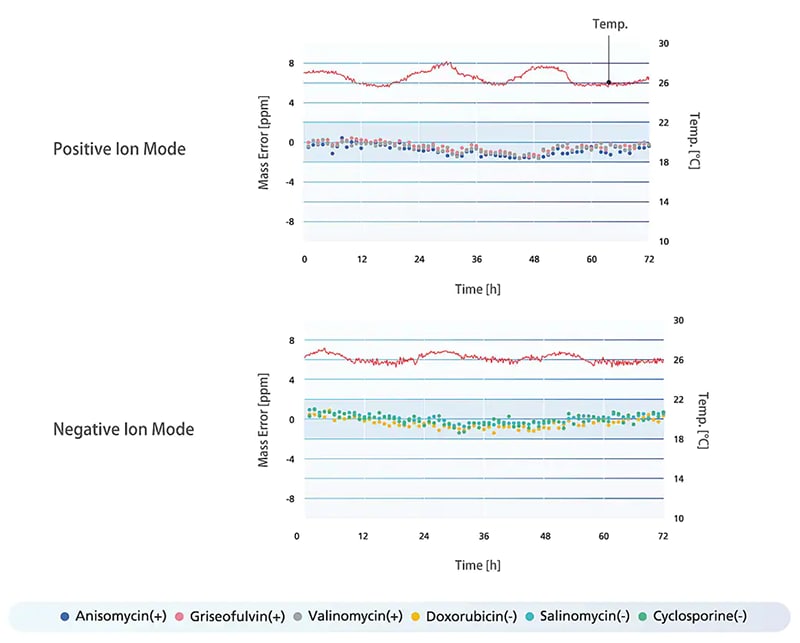 A sub-probe separate from the main probe is included as standard with the LCMS-9050. The ionization unit is equipped with two probes, one for analysis and one for mass calibration, so the ionization unit does not need to be replaced during mass calibration or other equipment tuning. In addition, analysis and tuning can be performed without worrying about flow line contamination. Multiple sample vials can be stored in the unit, so the system can accommodate multiple calibration samples. 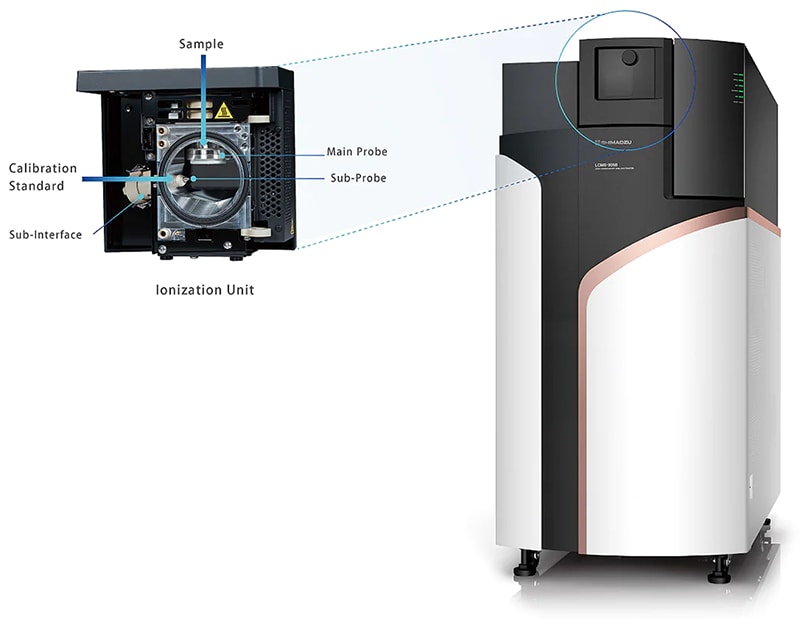 The LCMS-9050 includes an auto-tuning function that uses a standard sample to automatically adjust mass accuracy, resolution, sensitivity, and other parameters. The function includes various tuning modes that can be selected depending on the instrument status, such as the full-tuning mode for tuning the entire system or other modes for tuning only the TOF unit for mass calibration. Auto-tuning can be executed from the LabSolutions™ LCMS workstation software without configuring any complicated settings, which means anyone can start an analysis with the system adjusted to its optimal state.

The system inherits easy maintenance from previous models, and is designed to simplify maintenance in the vicinity of the interface. The desolvation line (DL), which injects the sample into the vacuum unit, and the ESI capillary can be replaced quickly and easily. These parts can be replaced with the vacuum maintained as is, so system downtime can be minimized.

When switching between positive ion mode and negative ion mode, the flight tube voltage changes continuously to the target value. Mass errors will occur if analysis is performed before the voltage reaches the target value, so a stabilization standby time is required when switching polarity. With previous models, a certain amount of time was needed for stabilization standby, which made simultaneous positive ion/negative ion analysis difficult. 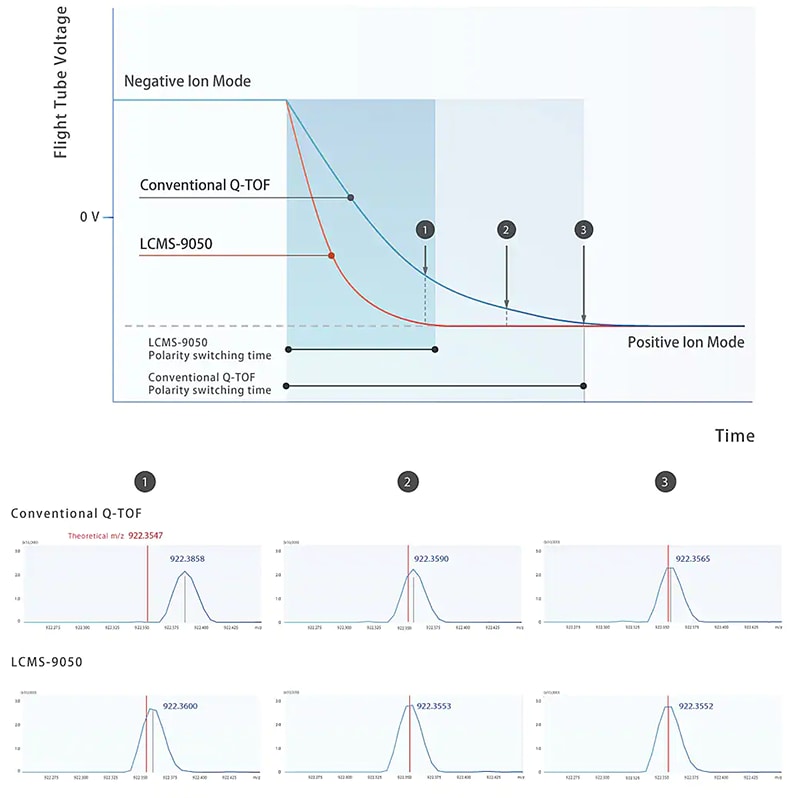 Just as with unipolar analysis, under usual laboratory conditions, six standard antibiotics (with molecular weights between 265 and 1203 Da) were subjected to simultaneous positive/negative ion analysis during a single analysis. The sub-interface was used to inject the external standard. Consecutive analyses were implemented until the external standard was used up, and a mass accuracy of within ±3 ppm was indicated for all compounds. Stable mass accuracy was maintained, even when performing long-term consecutive analyses using positive/negative ionization switching mode. 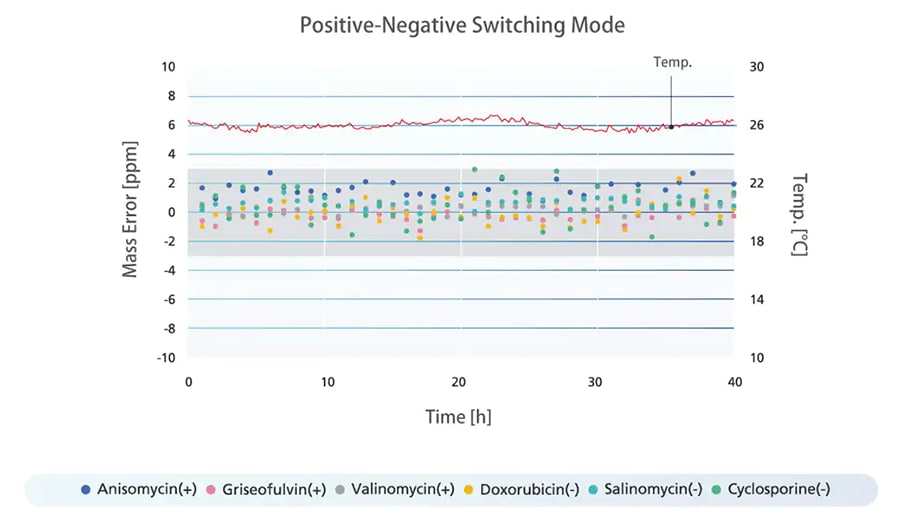 A world of new applications

Analysis data accuracy is improved, because with pretreated samples under the same conditions, the positive/negative ions can be detected with no time difference. In addition, information on positive/negative ions can be obtained from a single analysis even for trace samples, which reduces the amount of reagents used. The data is output in a single data file, which makes it easy to compare the positive ion/negative ion analysis results.

The LCMS-9050 is recognized with the Eco-Products Plus label, Shimadzu’s proprietary eco-friendly product certification. Mobile phase and sample consumption can be reduced by 50 % by performing simultaneous positive ion/negative ion analysis, compared to when analyzing each mode respectively. In addition to reducing running costs during analysis, this contributes to the formation of a recycling-oriented society by promoting the efficient use of resources.

Accommodates a Variety of Needs

The LCMS-9050 is designed so that a variety of optional devices can be connected. The ESI ionization unit included as standard can easily be replaced with a DPiMS™ probe electrospray ionization unit. In addition, the Q-TOF can be combined with the CLAM™ fully automatic LCMS pretreatment unit, the Nexera Mikros™ micro flowrate system, and the Nexera™ UC supercritical fluid extraction (SFE)/supercritical fluid chromatography (SFC) system.

A feature of supercritical fluid chromatography (SFC) is its comprehensiveness, which enables the separation and analysis of a wide range of compounds varying from low polarity to high polarity. Combining this with the LCMS-9050 enables the simultaneous analysis of positive ions and negative ions, so compounds with an even wider range of properties can be batch analyzed, heightening the comprehensiveness of a single analysis.