Designed to be the same width as the Shimadzu Nexera series LC components, the compact LCMS-2050 is stackable; no additional bench space is required. It can be integrated seamlessly with the Nexera series, i-Series, legacy model HPLC systems, and the Nexera Prep preparative system.

Mass spectrometers are often considered difficult to use, but the advanced engineering of the LCMS-2050 makes it as simple to use as other LC detectors. Only the most basic of acquisition parameters are required to obtain reliable and sensitive detection.

Mass-it is a new function that annotates MS results onto LC results. Mass spectral information is automatically extracted from peaks and displayed on the UV chromatogram, enabling the user to verify MS and UV data simultaneously. Mass information on the UV chromatogram can alert the user to components with no UV absorption or co-eluting peaks, preventing compounds from being overlooked. Time savings and higher data integrity are the result. 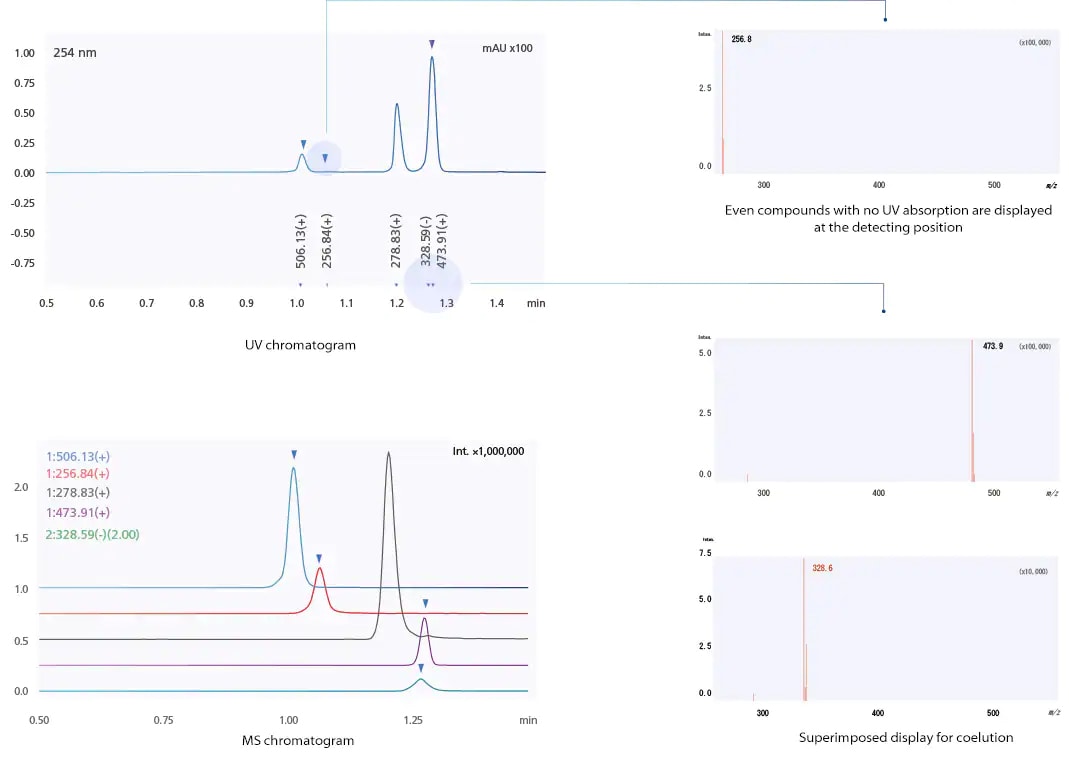 Measures a Wide Range of Compounds

A heated dual ion source (DUIS), which combines the features of electrospray ionization (ESI) and atmospheric pressure chemical ionization (APCI), is the LCMS-2050’s standard ionization source, enabling compounds with a wide range of characteristics to be analyzed simultaneously. Heated DUIS includes both an ESI spray nozzle and an APCI corona needle, making it possible to detect both high and low polarity molecules in a single run. In the example below, high-polarity Simetryn is detected, as well as the low-polarity Quintozene, which is difficult to detect by ESI alone. 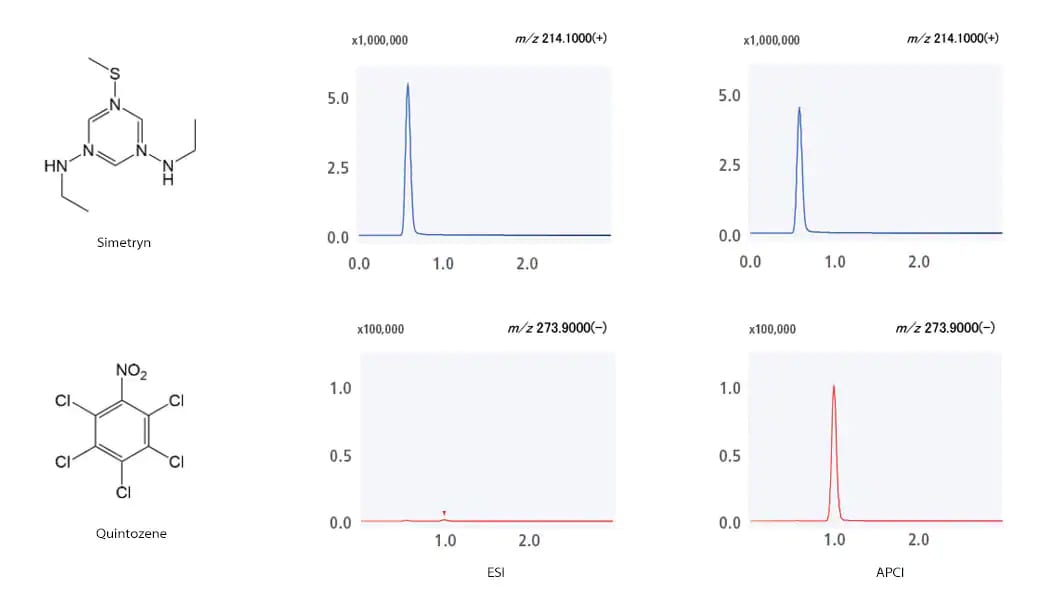 With an m/z range of 2 to 2,000, the LCMS-2050 is capable of analyzing large biopolymers. Multiple charge states are produced by electrospray ionization of biomolecules, such as peptides, proteins, and oligonucleotides, making the LCMS-2050 suitable for the characterization of these compounds. A mass spectrum of Nusinersen, an antisense oligonucleotide with a molecular weight of 7127 u, is shown below. Five different multi-charged states were detected by the wide mass range of the LCMS-2050, enabling accurate deconvolution using LabSolutions Multi-charged ion analysis software. The molecular weight was determined with excellent accuracy.

High-speed MS data sampling is required for high-speed analysis by UHPLC. High-speed performance is a hallmark of Shimadzu LCMS detectors, and the LCMS-2050 is no exception. The LCMS-2050 provides the world’s fastest performance, with a scan speed of 15,000 u/sec and a positive/negative ion switching speed of 10 msec. Thanks to the sufficient sampling rate, the instrument reliably captures sharp UHPLC peaks. At slower scan speeds (7,500 and 10,000 u/sec), data points are insufficient, so the peaks are either lost (peak 2) or insufficiently separated (peaks 3 and 4, and peaks 5 and 6). If the scan speed is fast (15,000 u/sec), sufficient data points are ensured, so the peaks are sharp and their separation is good. 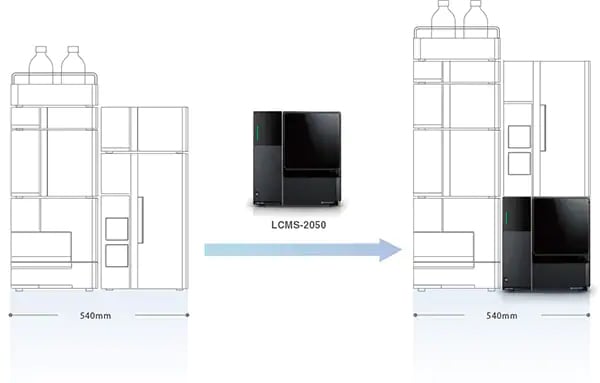 Mass spectrometer calibration and calibration checks for mass accuracy, resolution, and intensity can be performed automatically using the System Check function. The calibration standard is injected through an independent ESI spray source, and re-calibration can be automatically initiated if required, resulting in consistent data acquisition and laboratory operation without the need of user intervention. Calibration report outputs ensure traceability of instrument status.

Thanks to its small size, its single-phase 100 to 240 V speciﬁcations, and its Ecology Mode function, the LCMS-2050 achieves energy savings of 43% in comparison to the LCMS-2020. It is also recognized as an Eco Product Plus under Shimadzu's proprietary environmentally friendly product recognition system. The system not only limits running costs during analysis, but contributes to a carbon-free society by limiting CO2 emissions.

Like all other MS products by Shimadzu, the ionization interface of the LCMS-2050 has a simple, accessible design that minimizes the effort needed to maintain the instrument. The desolvation line (DL) that transfers the sample into the vacuum chamber can be replaced without using tools and without breaking vacuum. Quick and easy maintenance means less downtime, labor, and cost.