What is meant by cell or solvent cut-off? 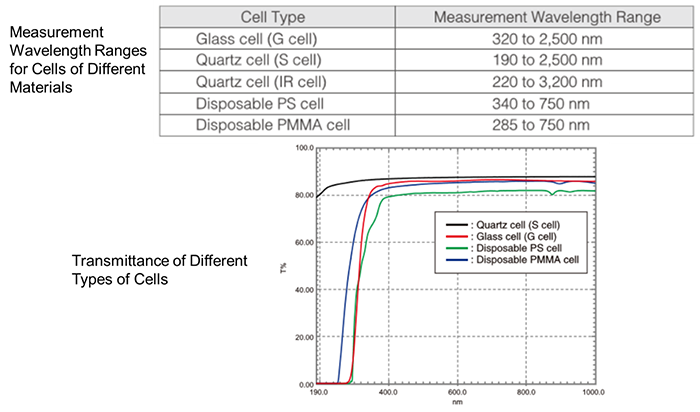 The material of the cell must have no absorption at the measurement wavelength. Two materials often used for cells are glass and quartz. Polystyrene (PS) and polymethylmethacrylate (PMMA) are mainly used for disposable cells. The indicates the wavelengths for which the different types of cells can be used. In this way, the measurable wavelength range varies

according to the cell material. The figure shows the transmission spectra obtained for different types of cells using air as the object of measurement. It can be seen that there is no absorption by the cells in the measurement wavelength ranges given in the table.

In addition to measurement wavelength, there is also the issue of chemical resistance. Except for use with strongly alkaline solutions, glass and quartz have extremely good chemical resistance. With resin cells, however, the chemical resistance varies with the material, so care is required when selecting the cell used for measurement. Another point to be noted is that there are small differences in the optical path lengths of individual disposable cells, which are generally discarded after use. This may lead to errors in quantitative values.

As glass is opaque in the ultraviolet region, glass cells offer a measurement range of approximately 320 nm to 2500 nm, which is narrower than quartz cells. At just several hundred dollars each, however, they are a convenient and cheaper option than quartz cells if measurements are not required in the short wavelength region below about 320 nm. These cells are often marked "G".

To eliminate variations in the optical path length from cell to cell, a series of measurements is performed using the same cell and rinsing the cell between measurements when glass or quartz cells are used. Disposable cells are made of plastic and can be discarded after use. Unlike the glass and quartz cells described above, a different disposable cell is used for each sample. This makes it difficult to acquire accurate data because variations in the optical path length readily occur from cell to cell. Disposable cells are used when high measurement accuracy is not required. They are useful for the measurement of biological samples where it is difficult to wash the sample out of the cell. As disposable cells are made of plastic, they are unable to measure samples that attack plastics, such as organic solvents. They are also opaque in the ultraviolet and near-infrared regions; as a result, measurements are restricted to the visible light region.