How does a beam chopper work? 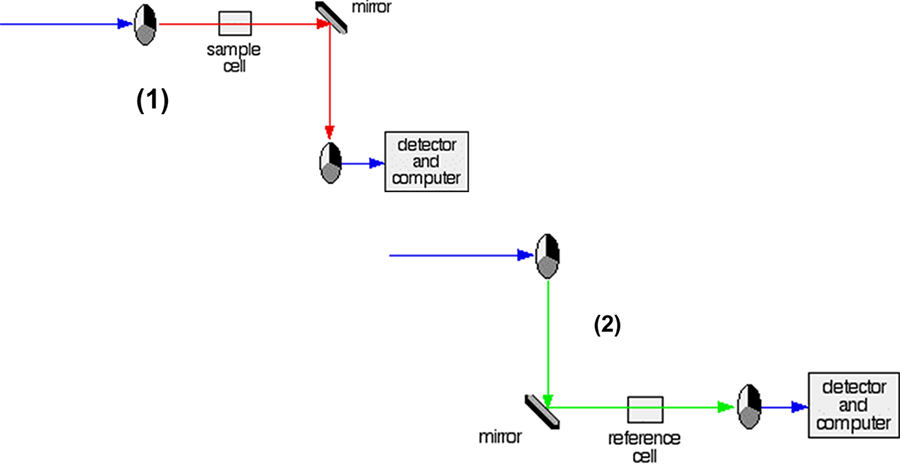 The sample cell contains a solution of the substance you are testing, usually a dilute solution. The solvent is chosen so that it doesn’t absorb any significant amount of light in the wavelength range of interest. The reference cell contains only the pure solvent. Now even with a double beam instrument a background correction must still be performed before the measurement of any sample; however, this instrument design offers a number of advantages over its single beam counterpart. First, the chopper spins at 60 Hz so that a complete cycle of sample, reference, and dark current occurs every 16 milliseconds (that’s 60 times a second). This cycle permits the instrument to be stabilized every 16 milliseconds. Which means that any fluctuations due to lamp instability, detector sensitivity changes, or resistance value changes in the electronics are compensated for in real time via a comparison (ratio) of the reference and sample beam measurements. The net effect, very small to insignificant drift levels over time.

Modern double beam spectrophotometers may only need a background correction performed every six to eight hours. Since the solvent can be placed in the reference beam for real time measurement, a comparison, it’s actually a ratio, of the solvent “blank” and the sample can be performed. This allows for the direct measurement of the dissolved compound of interest in real time. This means that if your solvent has an absorbance it is easily calculated away. Another feature is that reference beam attenuation can be performed when high absorbance values (usually above 4) need to be measured.