What component detects the light in a spectrophotometer? 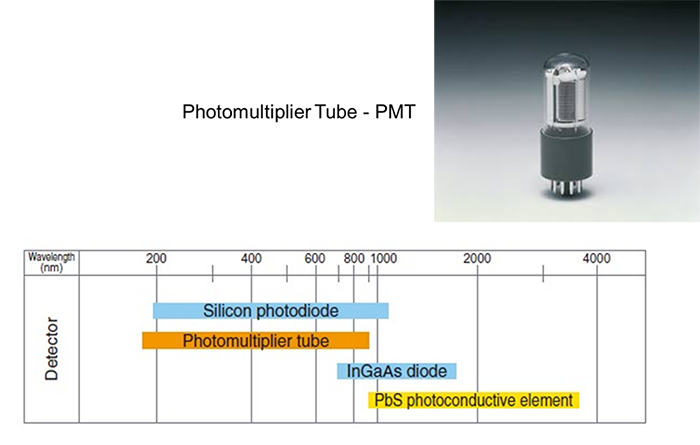 The mechanism for sensing light and converting it to signals that we are most familiar with is the human optic nerve. The human eye senses light in a wavelength range of approximately 400 to 700 nm, and sends signals to the brain through nerve tissue. You could say that the eye is the optical detector of visible light that we are most familiar with. The human eye is sensitive to light in the visible region, and is most sensitive to green light with a wavelength of around 550 nm. In the same way, the detectors in spectrophotometers also have a wavelength range that they can be used for, and their sensitivity varies with the wavelength. Representative detectors with sensitivity in the ultraviolet and visible region include the photomultiplier tube and the silicon photodiode. Regarding near-infrared detectors, PbS photoconductive elements were used exclusively in the past, although nowadays there are instruments in which InGaAs photodiodes are used for part of the near-infrared region. The bottom figure shows the relationship between various detectors and wavelength ranges.

The detector converts the incoming light into an electrical current that can be quantitated. The higher the current, the greater the intensity of the light. For each wavelength of light passing through the spectrometer, the intensity of the light passing through the sample cell is measured. The most common type of light detector in UV/Vis spectrophotometers is the photomultiplier tube (PMT). The wavelength range for PMT’s is from 150 nm to 900 nm, although the region between 850 nm to 900 nm is marginal. PMT’s are one of the most sensitive light detectors made. In many cases a PMT can detect a single photon (above). Under the photon theory of light, a photon is a discrete bundle (quantum) of electromagnetic (light) energy. Photons are always in motion and, in a vacuum, have a constant speed of light to all observers, at the vacuum speed of light of c = 2.998 x 108 m/s.

The chart at the bottom displays the functional wavelength envelopes of the various detectors found in UV/Vis and UV/Vis/NIR spectrophotometers.