What types of chemistry can a UV/Vis spectrophotometer measure? 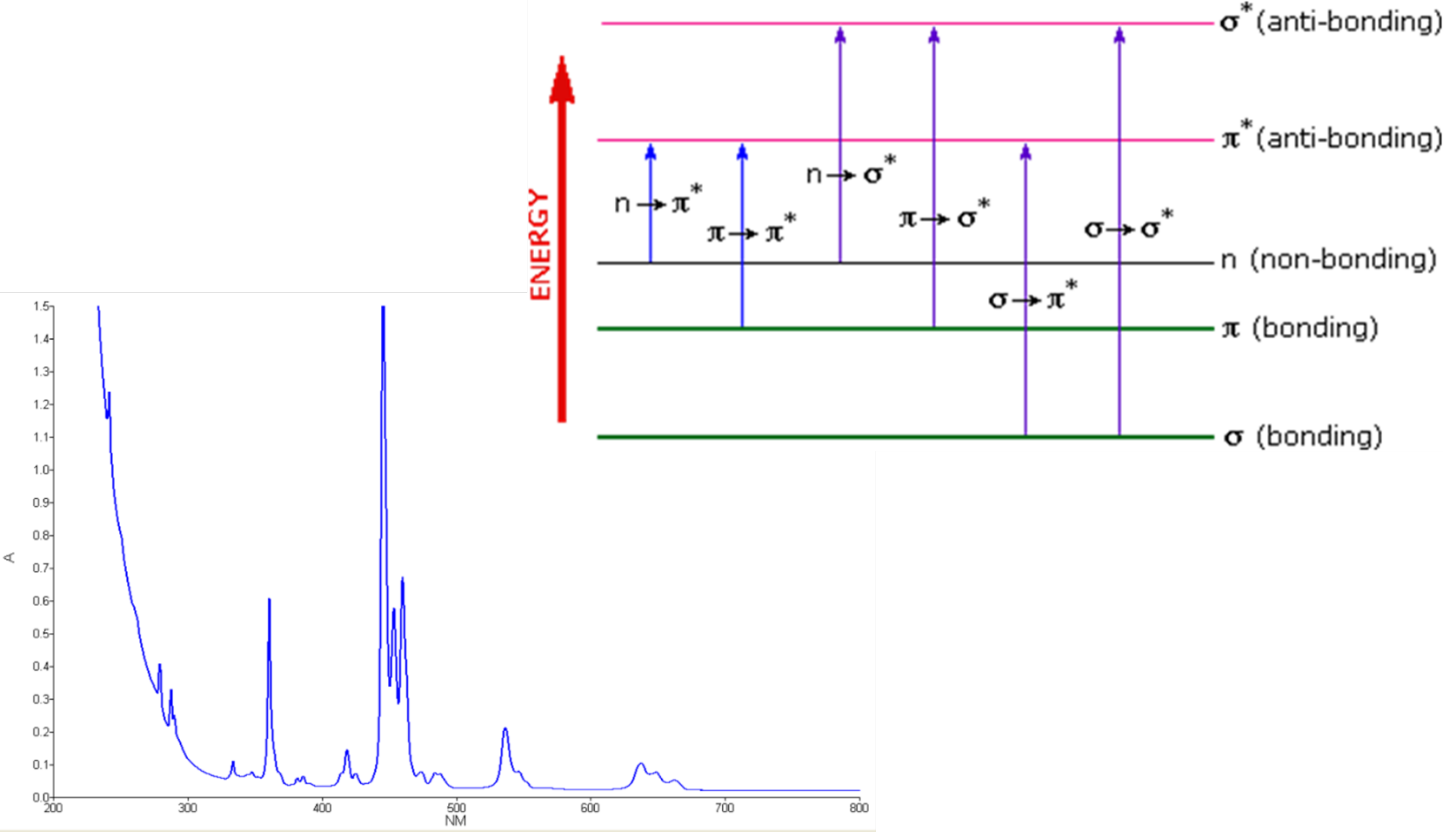 Here we will consider the electron transitions of the UV/Vis spectral region. This high energy light, compared to near infra-red, has enough energy to cause electronic transitions. These types of transitions move electrons from low energy levels, in an atom or molecule, to higher energy levels.

First, we will explain what happens when organic compounds absorb UV or visible light, and why the wavelength of light absorbed varies from compound to compound. Put simply the energy from the light is imparted to the electrons involved in chemical bonding. This causes the electrons to be promoted (moved) to a higher energy level; thereby, absorbing the light energy. These energy levels are associated with the bonding and anti-bonding orbitals of conjugated double and triple bonded carbon atoms or aromatic benzene type ring systems in organic molecules. Remember that the diagram above isn’t intended to be to scale, it just shows the relative placing of the different orbitals. When light passes through the compound, energy from the light is used to promote an electron from a lower energy bonding or non- bonding orbital into higher energy empty anti- bonding orbitals. The possible electron jumps that light can cause are seen in this slides figure (upper right).

Real world analogy: The promotion of an electron to a higher energy level is just like throwing a ball into the air. The energy from the muscles of your arm (light) is imparted (promotion) to the ball (electron) causing it to rise against the force of gravity (ground state). The ball then reaches a certain height (excited state) that is determined by the amount of effort (light wavelength) you used in the throw. This is the process of light absorption in a nutshell, except! The ball (electron) does not just hang out at the higher energy levels, it falls back to the ground level from where it was originally promoted. The same thing happens to the promoted electron when the light energy is shut off. The electron drops back down to the ground state. The potential energy in the falling electron is released as heat or it can be re-emitted as light (fluorescence or phosphorescence). This re- emitted light can be studied by luminescence spectroscopy.

That means that in order to absorb light in the region from 200 to 800 nm (which is where the spectra are measured), the molecule must contain either pi bonds Double bond or aromatic ring systems) or atoms with non- bonding orbitals. Remember that a non- bonding orbital is a lone electron pair on, say, oxygen, nitrogen or a halogen. Groups in a molecule which absorb light are known as chromophores. In addition to organic molecules, individual inorganic at- oms as well as metallic ionic complexes can absorb as well. Inorganic complexes tend to yield sharper spectral peaks with narrow half band widths. An example of a rare earth inorganic compound, holmium oxide, is shown at bottom left.