Shimadzu in the Community

Shimadzu in the Community

At Shimadzu Scientific Instruments (SSI), our commitment to Contributing to Society through Science and Technology doesn't stop at our high-precision measuring instruments. We strive to put science into the reach of everyone, children and adults alike. Using our technological and personal resources, we aim to enlighten and inspire current and future scientists. In essence we focus to give back to the community by bettering the world we live and work in.

Scroll down to see the activities we have recently participated in.

Shimadzu (Headquarters) donated $1,000 to the family of fallen firefighter Nathan Flynn. Flynn, 34, was a 13-year veteran of the Howard County Department of Fire and Rescue and a volunteer fireman in Harford County. Flynn tragically died battling a seven-alarm fire on July 23, 2018. Flynn leaves behind a wife and five children.

The Corporate office, New Jersey and North Atlantic regions graciously donated toys to the U.S. Marines Toys for Tots Campaign. Nine boxes of toys were collected and distributed to the region’s local toy drop-off location to provide gifts to children that are less fortunate. 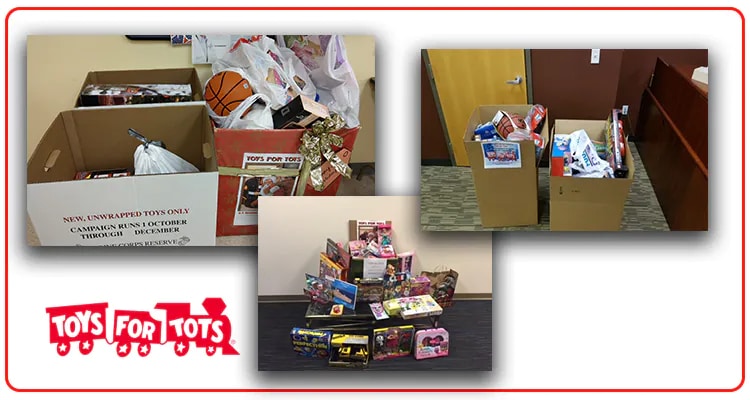 Shimadzu coordinated the 2017 Thanksgiving food Drive with non-profit organization Move for Hunger. Move for Hunger works with relocation companies across America to deliver unopened food and 100% of cash proceeds to local food banks. Employees donated $680 and 1,214 lbs. of food for the 2017 Thanksgiving Food Drive. This was enough to feed over 1,500 people. This could not be pulled off without the help of the Wellness Committee and Shimadzu employees.

Employees raised $5,495 in donations to support our affected TX employees. The company, Mr. Kaito agreeing, graciously matched the donation dollar for dollar. Thank you once again for your kindness and generosity that you put into making the event a success. In response to Hurricane Maria, Shimadzu donated generators to our employees in Puerto Rico.

The 4th Annual Anton-Parr 5K, benefitting St. Jude Children's Research Hospital was held on the morning of March 8th. Shimadzu had 13 employees enjoy an early morning run through Centennial Olympic Park. Jeffrey Ratliff joined the Shimadzu team this year, he remarked "What a way to start your morning!" While Stephanie Rosenburg who has ran in all four Anton-Paar 5k events noted it was "better weather than Chicago a couple years ago." 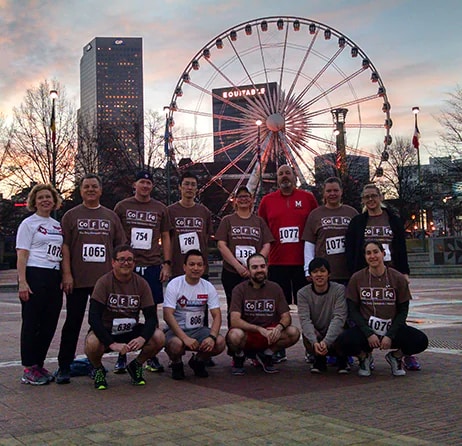 The 3rd Annual Anton-Parr 5K, benefitting St. Jude Children's Research Hospital, was a great way to bring the Shimadzu group together outside of the booth. We had a good turnout, and for some it was their first time back running in a few months. Hopefully we can get some more participants next year to make our Shimadzu team even stronger. The weather held off that morning so it was not raining and much warmer than the cold temperatures up north. "It was fun" remarked Paul Rementer. Here's to starting recruiting for next year's team! Ganbarou! 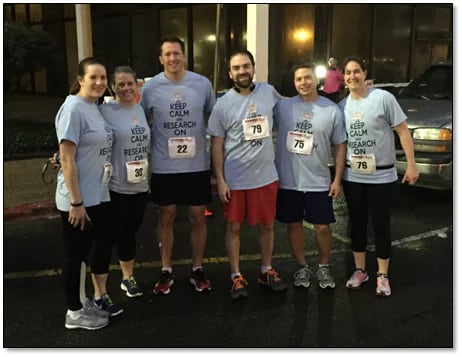 SSI Headquarters adopted 7 people for the holiday season and helped make their holidays a little brighter by purchasing gifts from their wish lists. Over a period of two weeks, almost all of the items requested were donated by various employees as well as cash donations in excess of $240.

House of Ruth assists women and children who are victims of domestic violence. For more information please visit http://www.hruth.org/.

Shimadzu Scientific Instruments recently adopted a portion of a highway near our corporate office in Columbia, MD. Our sponsorship helps to offset the cost of trash removal from the roadway.

Presentation on Careers in Science
University of South Carolina--Lancaster
October 15, 2014

Field Technical Support Specialist Marion Welch spoke to science majors and enthusiasts at University of South Carolina in Lancaster. He gave them some information on careers in science, specifically what he does as a Field Tech Support Specialist at Shimadzu.

Employees from Shimadzu made donations to CrisisLink, a 24-hour hotline that offers mental health and suicide prevention services. They take calls as part of the national suicide prevention hotline with headquarters located in Arlington VA. CrisisLink handles more than 20,000 calls per year.

Shimadzu Scientific Instruments was happy to sponsor Daniel Yeich during his bike ride for MS. Daniel, a Mass Spec Service Specialist in the Mid-Atlantic Region, proudly displayed the Shimadzu colors and logo as he rode through the National Harbor and into southern Maryland. He participated in both events: the 100 mile loop on June 7th and the 30 mile loop on June 8th. According to Daniel, "It was a very challenging course with a lot of climbing. I was able to raise $650 thanks to donations from family, friends, and co-workers."

HPLC Product Specialist Stacey Ambuehl spoke to the 2nd Grade classes at Hilltop Elementary for Career Week. With some help from Matthew Ferrarelli and the Physical Measurements Group, the kids were shown videos of gummi worms and string cheese being pulled apart by a Shimadzu AGS-X Universal Tester. Besides learning how stretchy gummi worms are, they also learned that science is everywhere and in everything!

The 2nd Annual Anton-Paar 5K Walk/Run benefitting the Wounded Warrior Project was held on the morning of March 4th. Stephanie Rosenberg, Kurt Vogler and Paul Rementer from SSI participated in the race. According to Kurt, "It was 15 degrees (warm by MN standards) and very windy on the beautiful shores of Lake Michigan. What made it so brutal was waiting 30 minutes in these conditions for the race to start." Nothing will keep our employees from running, not even freezing cold temperatures. Good job everyone!

Employees at the corporate offices in Columbia, MD donated non-perishable food items along with mittens. These were then donated to Grassroots Crisis Intervention Center.

Every spring the Johns Hopkins University Track and Field team hosts a 5K run on their Baltimore campus. Proceeds from the race go towards not only helping the team, but to a charitable organization of their choosing. This year one of the athletes tragically died of lymphoma, a type of blood cancer. In memory of their fallen comrade, the 11th Annual Blue Jay 5k benefitted the Lymphoma Research Foundation. Shimadzu Scientific Instruments and the Wellness Committee proudly became one of the sponsors of this year’s race, held on Sunday, April 28. As a sponsor SSI was able to give back to the local community, and as a reward had the company logo adorn the back of the racing shirts, as well as the website.

Over 20 Shimadzu employees along with friends and family signed up to participate in this year’s race. In all, 240 people ran or walked in the 5k (3.1 miles). The name of Shimadzu’s team was Team Ganbarou! Ganbarou is a Japanese word that translates to ‘let’s do our best,’ and has been the message this year from President Maruyamasan. The Shimadzu 5K team decided to bare this name because having the Ganbarou Spirit is associated with fighting and not giving up in the face of adversity, a perfect mantra for the challenging 5k course. Team Ganbarou! showed unity by racing in shirts designed especially for the event.

Members of Team Ganbarou! met at SSI early that Sunday morning (7:30am) to fuel up on coffee, bagels and fruit, and carpool to the Johns Hopkins campus. After some stretching and socializing, the race officially started at 9:45am! It was a challenging 3.1 miles, with most of the course going uphill; but everyone finished and aside from a few sore muscles everyone was glad they had done it. Afterwards Team Ganbarou! headed to Gertrude’s, an upscale local eatery on campus for a celebratory meal. It was a perfect day and a great team-building exercise for all those who participated.

On Tuesday morning March 19, just before sunrise, team Shimadzu UFSweepers headed out to compete in Anton-Paar’s first inaugural PittCon 5k. The event attracted over 100 participants and featured a scenic course along Boathouse Row on the Schuylkill River in Philadelphia. Proceeds from the run went to the Wounded Warrior Project which provides programs and services to severely injured service members during the time between active duty and transition to civilian life. The cold (34°) damp morning or booth-tortured feet couldn’t stop these runners from accomplishing the team slogan of “kickin’ mASS”.

Leftover food from company-sponsored corporate events is donated to Grassroots, a crisis intervention center located in Columbia, MD. For more information or to make a donation please visit http://grassrootscrisis.org/.