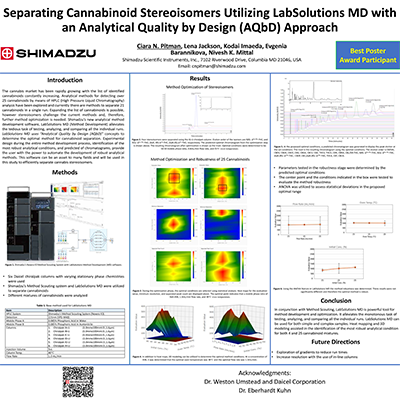 The cannabis market has been rapidly growing with the list of identified cannabinoids constantly increasing. Analytical methods for detecting over 25 cannabinoids by means of HPLC (High Pressure Liquid Chromatography) analysis have been explored and currently there are methods to separate 21 cannabinoids in a single run. Expanding the list of cannabinoids is possible, however stereoisomers challenge the current methods and, therefore, further method optimization is needed. Shimadzu’s new analytical method development software, LabSolutions MD (Method Development) alleviates the tedious task of testing, analyzing, and comparing all the individual runs. LabSolutions MD uses “Analytical Quality by Design (AQbD)” concepts to determine the optimal method for cannabinoid separation. Experimental design during the entire method development process, identification of the most robust analytical conditions, and predicted of chromatograms, provide the user with the power to automate the development of robust analytical methods. This software can be an asset to many fields and will be used in this study to efficiently separate cannabis stereoisomers. 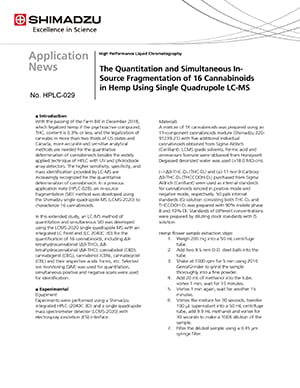 With the passing of the Farm Bill in December 2018, which legalized hemp if the psychoactive compound, THC, content is 0.3% or less, and the legalization of cannabis in more than two thirds of US states and Canada, more accurate and sensitive analytical methods are needed for the quantitative determination of cannabinoids besides the widely applied technique of HPLC with UV and photodiode array detectors. The higher sensitivity, specificity, and mass identification provided by LC-MS are increasingly recognized for the quantitative determination of cannabinoids. In a previous application note (HPLC-028), an in-source fragmentation (SID) method was developed using the Shimadzu single quadrupole MS (LCMS-2020) to characterize 16 cannabinoids.