How does a spectrophotometer measure a sample? 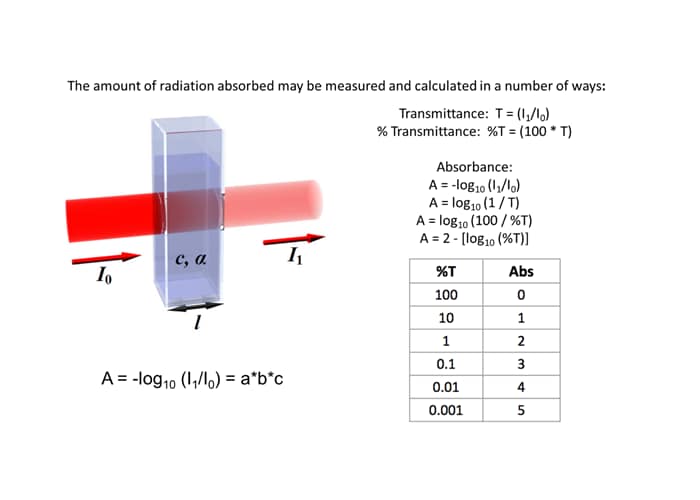 For most inexpensive spectrophotometers you will come across, the absorbance ranges from 0 to 3, but it can go higher than that for more expense instruments. The UV-3600i Plus and Solid Spec 3700i can measure up to 8 and sometimes higher. An absorbance of 0 means that no light of that particular wavelength has been absorbed by the sample. The intensity of light entering and exiting the sample are both the same, so the ratio I1/I0 is 1, so -log10 of 1 is zero. An absorbance of 1 happens when 90% of the light at that wavelength has been absorbed, which means that the intensity is 10% of what it would otherwise be. In that case, I1/I0 is 10/100 = 0.1) and -log10 of 0.1 is 1.

Absorbance is a logarithmic scale similar to the Richter Scale used for earthquakes. An increase of 1 unit on the absorbance scale translates into a factor of 10 decrease on the %T scale. Another name people tend to use for a logarithmic relationship (factor of 10 change) is “order of magnitude”. Thus an instrument that can measure to 3 absorbance units has a range of 3 orders of magnitude. Remember also, as the %T value decreases the absorbance value increases. Above is a simple table that summarizes the relationship between %T and absorbance.