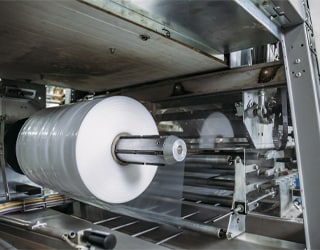 Testing, Analysis and Inspection of Plastics and Polymers

Engineering plastics such as acrylonitrile butadiene styrene (ABS), polycarbonates, and polyamides are increasingly used in automotive and other high-performance applications. Shimadzu offers a complete range of instruments to characterize the composition and thermal and mechanical behavior of plastic materials.

Below are a few examples: 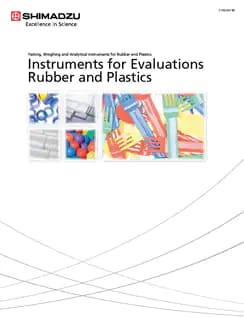 Instruments for Evaluations of Rubber and Plastics

Rubber and plastic products are used in a wide variety of areas. Evaluations of their basic performance and the components that determine their performance are indispensable for product development and quality control. Shimadzu not only offers a wide array of evaluation instruments, it also provides comprehensive support from application to after-sales service. 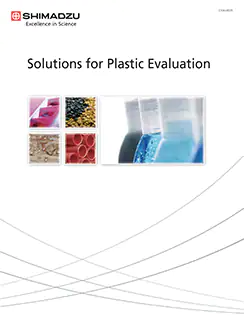 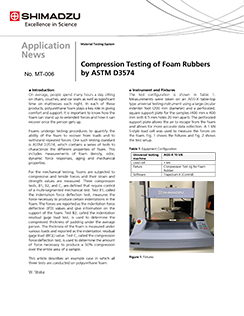 Foams undergo testing procedures to quantify the ability of the foam to recover from loads and to withstand repeated forces. One such testing standard is ASTM D3574, which contains a series of tests to characterize the different properties of foam. This includes measurements of foam density, odor, dynamic force responses, aging and mechanical properties. For the mechanical testing, foams are subjected to compressive and tensile forces and their strain and strength values are measured. Three compression tests, B1, B2, and C, are defined that require control of a multi-segmented mechanical test. Test B1, called the indentation force deflection test, measures the force necessary to produce certain indentations in the foam. The forces are reported as the indentation force deflection (IFD) values and give information on the support of the foam. Test B2, called the indentation residual gage load test, is used to determine the compressed thickness of padding under the average person. The thickness of the foam is measured under various loads and reported as the indentation residual gage load (IRGL) value. Test C, called the compression force deflection test, is used to determine the amount of force necessary to produce a 50% compression over the entire area of a sample. This article describes an example case in which all three tests are conducted on polyurethane foam. 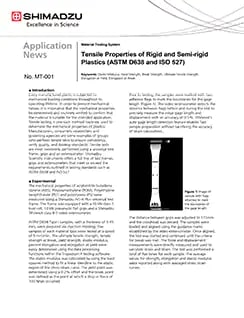 Every manufactured plastic is subjected to mechanical loading conditions throughout its operating lifetime. In order to prevent mechanical failure, it is imperative that the mechanical properties be determined and routinely verified to confirm that the material is suitable for the intended application. Tensile testing is one such method routinely used to determine the mechanical properties of plastics. Manufacturers, consumers, researchers and governing agencies are some examples of groups who perform tensile tests to ensure consistency, verify quality, and develop standards. Tensile tests are most commonly performed using a universal test frame, grips and an extensometer. Shimadzu Scientific Instruments offers a full line of test frames, grips and extensometers that meet or exceed the requirements outlined in testing standards such as ASTM D638 and ISO 527. 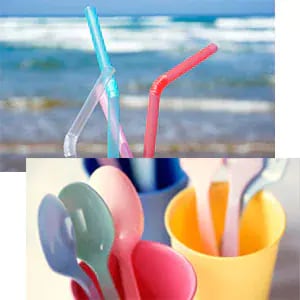 Testing and Characterization of Biodegradable Plastics

Biodegradable Plastics are plastics that are decomposed into low-molecular compounds by microorganisms in the environment. So they break down easily in nature, which is an opposite characteristic of petroleum-based plastics. They are recommended for single-use products. At this time, it is true they are inferior to petroleum-based plastics in the features of durability and functionality, so research and development of new materials is on going for a reliable solution.

Temperature-modulated DSC (TM-DSC) is a technique that makes it possible to acquire information that cannot be obtained with standard DSC by temperature control in which a modulation is overlaid on a constant temperature increase. In this article, the thermal characteristics of representative polymer materials were evaluated by using the temperature modulation function of the Shimadzu DSC-60 Plus.

Download Application (PDF)  Learn more about the DSC-60 Plus

The resins used in CFRPs can be differentiated easily by analysis by Fourier transform infrared spectrophotometry (FTIR), FTIR is an effective tool for quality control when determining the resin components of CFRPs before recycling. In this article, thermosetting and thermoplastic CFRPs were measured by FTIR and their component resins were differentiated.

FTIR is optimal for the analysis of such plastic contaminants. However, the infrared spectrum of degraded plastic differs from the spectral pattern before degradation. Accordingly, in searches using commercially available plastics libraries, even if a search result has top ranking, it can inadvertently consist of the spectral pattern for a different substance, making identification and qualification difficult. In this article, we introduce an example of the changes to the infrared spectrum of a plastic degraded by heat, and a sample search using a library containing data created by changing the heating temperature and time beforehand.

Investigation of Ultraviolet Degradation of Plastic with Mapping Program

Resin materials (plastics) are found in a wide variety of items used on a daily basis. Recently, plastics have started to be used as structural materials in transportation equipment, such as automobiles and aircraft, due to their strength and light-weight nature. In these applications, it is important to understand the mechanical strength properties of these plastics. ASTM D638 specifies methods for testing the tensile strength of plastics and other resin materials and for calculating their mechanical properties, and outlines accuracy requirements for the test frames and accessories used.

Here, we introduce an example of analysis of the shape and particle count concentration of particles contained in environmental water and their qualitative analysis by using a dynamic particle image analysis system and an infrared microscope