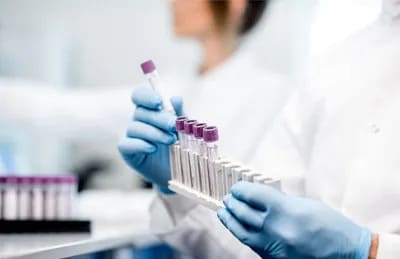 From scalable high-throughput UHPLC systems to innovative SFC-HRMS solutions, Shimadzu provides tools to take on your most challenging ADME/DMPK investigations.

Understanding the bioactivity of new drug candidates is of vital importance in development of safe and effective therapeutic compounds. Identifying and characterizing metabolites is key in avoiding toxicity and creating awareness of potential side effects. Within drug development, there is an ever-increasing demand to provide quantitative information related to all identifiable metabolites, highlighting the need for tools such as high-resolution Q-TOF mass spectrometry and high-sensitivity TQ mass spectrometry. For volatile metabolites, powerful GC-MS/MS solutions give additional insight beyond liquid chromatography methods.

Accurate, reproducible results from your ADME/DMPK laboratory can expose biotransformation mechanisms that guide the selection and refinement of candidates. The need to obtain this information from larger sample sets, often in a variety of matrices, highlights the need for automated sample handling. Our solutions give your lab the ability to perform sophisticated sample pretreatment, multiple injections in a single experimental run, and MS/MS multiplexing, all with the trusted reliability of Shimadzu chromatography and mass spectrometry.

Whether your challenge is complex isomers with multiple chiral centers, or needing to get that earliest in vivo time point, we bring the ease of traditional LC to SFC and SFC-MS. Powerful method screening software can automate selection of up to 12 columns for the most demanding chiral separations, and offer access to both UHPLC-RP and SFC conditions without user intervention. Our patented backpressure regulator allows seamless integration with mass spectrometry, offering unparalleled SFC-MS sensitivity.

GC-MS(/MS) and LC-MS/MS are widely used for measuring the total amount of metabolites in a sample. Selection of the appropriate instrument to be used is based on the target compounds and the objective.

This database contains multiple ready-to-use methods for comprehensive analysis of metabolites with different properties. Pretreatment examples are also included for various metabolites and samples. The user can begin metabolomics analysis without time-consuming evaluation of LC or MS conditions.

This method package provides a simultaneous analysis method that encompasses 158 compounds of lipid mediators, including compounds derived from the arachidonic cascade and more.

Simultaneous Analysis of Etizolam, Triazolam, and Their Metabolites in Biospecimens Using LCMS-9030 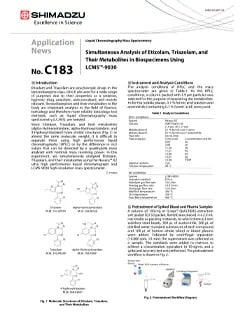 Benzodiazepines and their metabolites in the body are important analytes in the field of forensic toxicology and therefore more reliable toxicology test methods, such as liquid chromatography mass spectrometry (LC/MS), are needed. Since Etizolam, Triazolam, and their metabolites (alpha-Hydroxyetizolam, alpha-Hydroxytriazolam, and 4-Hydroxytriazolam) have similar structures or almost the same molecular weight, it is difficult to separate them using high performance liquid chromatography (HPLC) or by the difference in m/z values that can be detected by a quadrupole mass analyzer with nominal mass resolving power. In this experiment, we simultaneously analyzed Etizolam, Triazolam, and their metabolites using the Nexera™ X2 ultra high performance liquid chromatograph and LCMS-9030 high-resolution mass spectrometer. 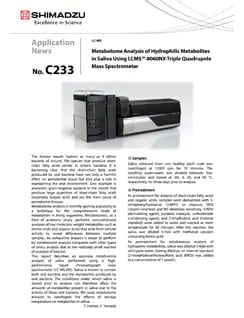 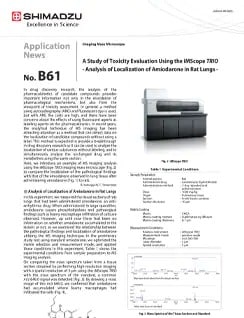 In drug discovery research, the analysis of the pharmacokinetics of candidate compounds provides important information not only in the elucidation of pharmacological mechanisms, but also from the viewpoint of toxicity assessment. In general, a method using autoradiography (ARG) and fluorescent dye is used, but with ARG the costs are high, and there have been concerns about the effects of using fluorescent agents as labeling agents on the pharmacokinetics. In recent years, the analytical technique of MS imaging attracted attention as a method that can detect data on the localization of candidate compounds without using a label. This method is expected to provide a breakthrough in drug discovery research as it can be used to analyze the localization of various substances without labeling, and to simultaneously analyze the unchanged drug and its metabolites using the same section. Here, we introduce an example of MS imaging analysis using the iMScope TRIO imaging mass microscope to compare the localization of the pathological findings with that of the amiodarone observed in lung tissue after administering amiodarone to rats. 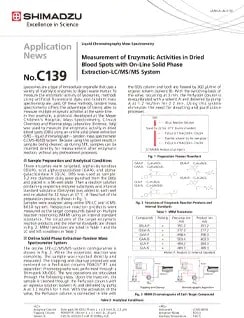 Lysosomes are a type of intracellular organelle that uses a variety of hydrolytic enzymes to digest waste matter. To measure the enzymatic activity of lysosomes, methods using artificial fluorescent dyes and tandem mass spectrometry are used. Of these methods, tandem mass spectrometry offers the advantage of being able to measure multiple enzymatic activities at the same time. In this example, a protocol developed at the Meyer Children's Hospital, Mass Spectrometry, Clinical Chemistry and Pharmacology Laboratory (Florence, Italy) was used to measure the enzymatic activity in dried blood spots (DBS) using an online solid phase extraction (SPE) - liquid chromatograph - tandem mass spectrometer (LCMS-8050) system. Because using this system results in samples being cleaned up during SPE, samples can be inserted directly for measurement after enzymatic reaction, without any pretreatment processes. 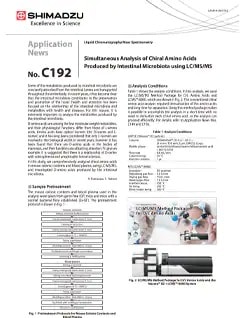 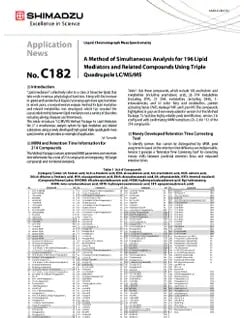 "Lipid mediators" collectively refer to a class of bioactive lipids that take a role in various physiological functions. Along with the increase in speed and sensitivity of liquid chromatograph mass spectrometers in recent years, a comprehensive analysis method for lipid mediators and related metabolites was developed, which has revealed the causal relationship between lipid mediators and a variety of disorders including allergy diseases and thrombosis. This article introduces "LC/MS/MS Method Package for Lipid Mediators Ver. 3", a simultaneous analysis system for lipid mediators and related substances using a newly developed high speed triple quadrupole mass spectrometer, and provides an example of application. 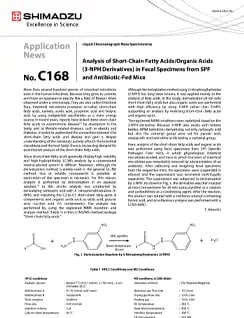 Here, analysis of the short-chain fatty acids and organic acids was performed using fecal specimens from SPF (Specific Pathogen Free) mice, in which physiological intestinal microbiota existed, and mice in which the level of intestinal microbiota was remarkably reduced by administration of an antibiotic. After collecting and weighing fecal specimens from the respective mice, the specimens were suspended in ethanol and the supernatant was recovered via centrifugal separation. This supernatant was subjected to derivatization by 3-NPH. As shown in Fig. 1, the derivative was then reacted at room temperature for 30 min using pyridine as a catalyst and carbodiimide as a condensing agent. After the reaction, the product was diluted with a methanol solution containing formic acid, and simultaneous analysis was performed with a LCMS-8060. 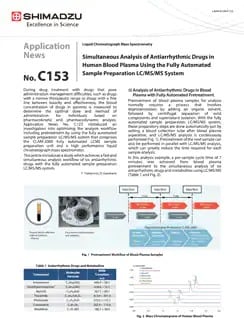 During drug treatment with drugs that pose administration management difficulties, such as drugs with a narrow therapeutic range or drugs with a fine line between toxicity and effectiveness, the blood concentration of drugs in patients is measured to determine the optimal dose and method of administration for individuals based on pharmacokinetic and pharmacodynamic analysis. Application News No. C123 introduced an investigation into optimizing the analysis workflow including pretreatment by using the fully automated sample preparation LC/MS/MS system that comprises the CLAM-2000 fully automated LCMS sample preparation unit and a high performance liquid chromatograph mass spectrometer. This article introduces a study which achieves a fast and simultaneous analysis workflow of six antiarrhythmic drugs with the fully automated sample preparation LC/MS/MS system. 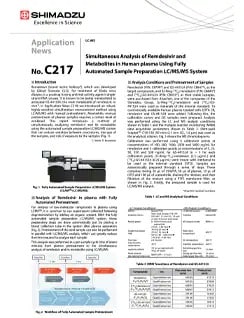 Remdesivir (brand name: Veklury®), which was developed by Gilead Sciences (U.S.) for treatment of Ebola virus disease, is a prodrug having antiviral activity against single-strand RNA viruses. It is known to be partly metabolized to activate GS-441524, the main metabolite of remdesivir, in vivo1). In Application News C218, we introduced a robust, highly-sensitive simultaneous measurement method using LC/MS/MS with manual pretreatment. Meanwhile, manual pretreatment of plasma samples requires a certain level of workload. This report introduces a method of simultaneously analyzing remdesivir and its metabolite using the automated sample preparation LC/MS/MS system that can reduce variation between procedures, mix-ups of the samples, and risk of exposure to the samples. 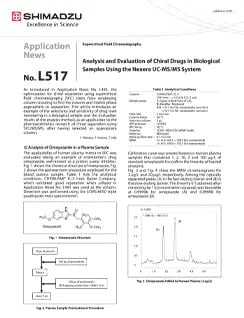 As introduced in Application News No. L495, the optimization for chiral separation using supercritical fluid chromatography (SFC) starts from employing column scouting to find the column and mobile phase appropriate to separation. This article introduces an example of the selectivity and sensitivity of drug level monitoring in a biological sample and the evaluation results of the analysis method, as an application to the pharmacokinetics research of chiral separation using SFC/MS/MS, after having selected an appropriate column. 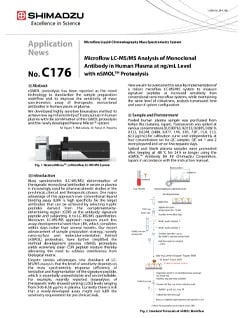 nSMOL proteolysis has been reported as the novel technology to standardize the sample preparation workflow and to improve the sensitivity of mass spectrometric assay of therapeutic monoclonal antibodies in human serum or plasma. We developed a highly sensitive bioanalysis method to achieve low ng/ml sensitivity of Trastuzumab in human plasma with the combination of the nSMOL proteolysis and the newly developed Nexera MikrosTM system. 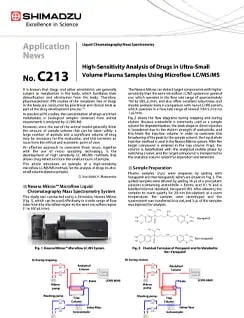 Pharmacokinetic (PK) studies of the metabolic fate of drugs in the body are conducted by preclinical and clinical tests as part of the drug development process. In preclinical PK studies, the concentration of drugs and their metabolites in biological samples obtained from animal experiments is analyzed by LC/MS/MS. However, since the size of the animal model generally limits the amount of sample volume that can be taken safely, a large number of animals and a significant volume of drug may be necessary for the evaluation, and this becomes an issue from the ethical and economic point of view. An effective approach to overcome those issues, together with the use of micro sampling technology, is the development of high sensitivity LC MS/MS methods that allows drug detection from a small amount of sample. This article introduces an example of a high-sensitivity microflow LC/MS/MS method, for the analysis of drugs in ultrasmall volume plasma samples. 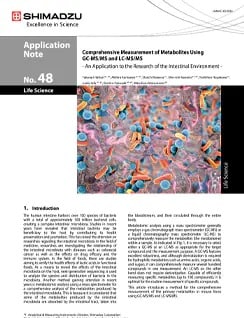 Metabolomic analysis using a mass spectrometer generally employs a gas chromatograph mass spectrometer (GC-MS) or a liquid chromatography mass spectrometer (LC-MS) to comprehensively measure the metabolites (the metabolome) within a sample. It is necessary to select either a GC-MS or an LC-MS as appropriate for the target compound and the measurement purpose. A GC-MS features excellent robustness, and although derivatization is required for hydrophilic metabolites such as amino acids, organic acids, and sugars, it can comprehensively measure several hundred compounds in one measurement. An LC-MS on the other hand does not require derivatization. Capable of efficiently measuring specific metabolites (up to 100 compounds), it is optimal for the routine measurement of specific compounds. This article introduces a method for the comprehensive measurement of the primary metabolites in mouse feces using GC-MS/MS and LC-MS/MS. 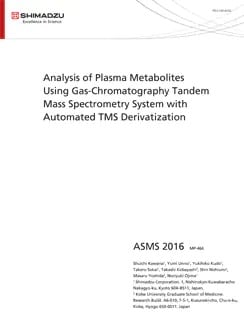 Gas-Chromatography Tandem Mass Spectrometry (GC-MS/MS) is one of highly suitable techniques for metabolome analysis because of the high separation, reproducible retention times and sensitive selective mass detection. However, metabolites are commonly derivatized before GC-MS/MS analysis. In case of TMS derivatization, the samples should be analyzed within 24 hours after derivatization, because the TMS derivatives will deteriorate after 24 hours. Moreover, metabolome analysis requires the measurement of more than 100 samples. Therefore, an effective analysis procedure and a reduction of exposure of operators to toxic reagents are required. In order to improve analysis accuracy, efficiency and safety, an Automated TMS Derivatization GC-MS/MS System was developed. In this study, the system is evaluated for analysis of metabolites in human plasma.