3.1. Information Obtained from the Analysis Results

The time (retention time) until the injected sample reaches the detector is a characteristic value of each component.
Investigating the retention time under given analysis conditions makes it possible to determine what a component is (qualitative analysis).
Additionally, the size of the component peak, in other words its area and height, makes it possible to determine how much of the component there is (quantitative analysis). 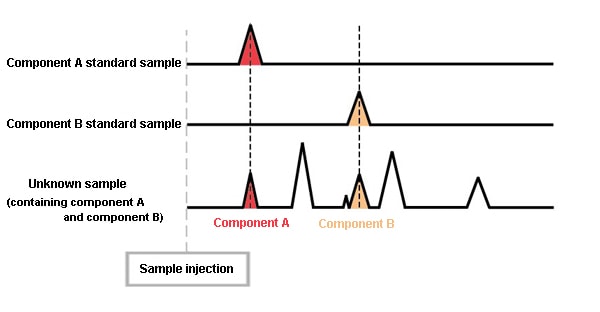 With GC, the retention time is the sole qualitative information. For this reason, if a standard sample is not available, it is not possible to determine what a peak is. Accordingly, one could say that this method is intended for the analysis of samples for which the components they contain are reasonably certain. To investigate samples containing unknown content, it is necessary to use analysis methods with a higher qualitative capacity such as GCMS. At the same time, it’s important to note that components exist with the same retention times under given analysis conditions. In other words, a seemingly single peak could indicate multiple components. In this case, cross checks must be performed by changing the column or the temperature conditions. For this reason, when performing GC analysis, it’s very important to completely separate the peaks. 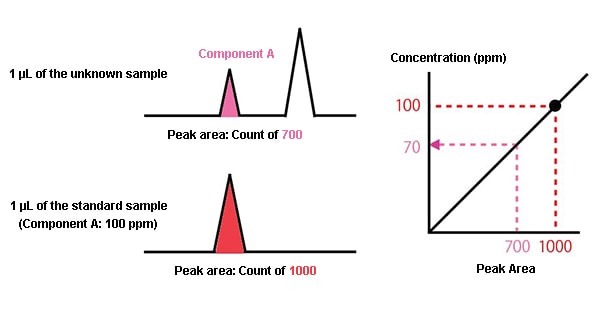 Advantages: Simple analysis since no standard sample is used.
Disadvantages: Reduced quantitation accuracy due to the effect of relative component sensitivity. 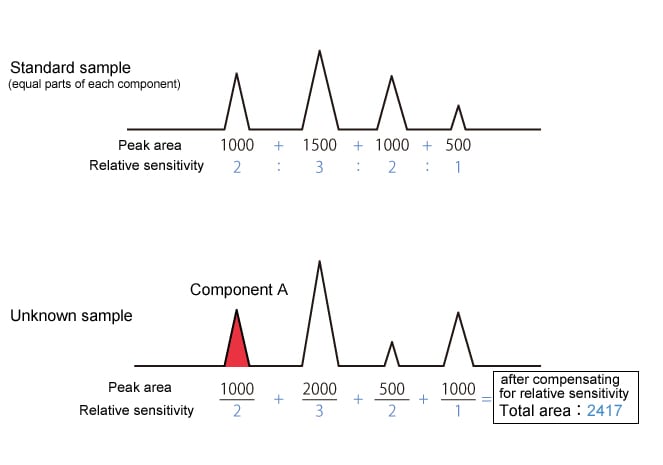 The absolute calibration curve method uses a standard sample of known concentration to prepare a calibration curve, then uses this curve to quantify components in an unknown sample.
Analysis can be relatively simple since only the target component needs to be detected to determine quantity. This is also the most popular method of quantitative analysis. 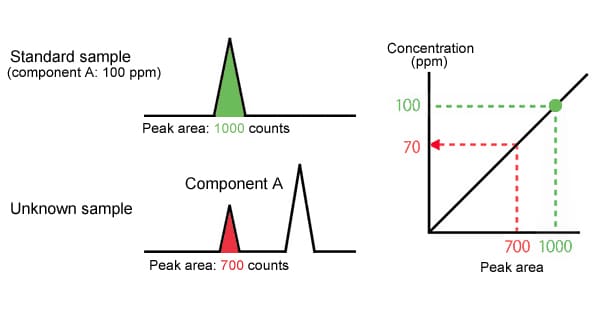 Selecting the internal standard can be difficult as it must fulfill all the requirements shown below.

The standard addition method analyzes an unknown sample and the same unknown sample spiked with a known amount of target component, then uses the difference between detected peak areas (peak height) to determine quantity. This quantitative method is often used to analyze samples containing a target component affected by the concentration of other components in the sample, such as odor component analysis and headspace analysis.