The detectors that can be used with Shimadzu gas chromatographs are shown below. They are broadly divided into general-purpose detectors and selective, high-sensitivity detectors. General-purpose detectors can analyze a wide range of compounds, of which the flame ionization detector (FID) is the most common because it can analyze almost all organic compounds. In contrast, selective, high-sensitivity detectors are only capable of detecting specific types of compounds selectively and with high sensitivity.

*The detection limits are approximations. Actual values will vary depending on the compound structure and analytical conditions.

Each detector requires gas, called the detector gas, based on its principle of detection. For example, the flame ionization detector (FID) uses a hydrogen flame so it requires hydrogen and air.

Analysis using a capillary column can also require a makeup gas added just before the detector to act as an auxiliary gas and ensure the detector receives a rapid supply of compounds. Makeup gas reduces the effects of increasing and decreasing column flowrates on detector sensitivity by increasing the sample transfer speed inside the detector and preventing peak broadening.

Schematic Diagram of the FID

The FID creates a hydrogen flame by burning air and hydrogen supplied from below. The carbon in a sample carried into the detector on carrier gas is oxidized by the hydrogen flame, which causes an ionization reaction. The ions formed are attracted by a collector electrode to an electrostatic field, where the components are detected. 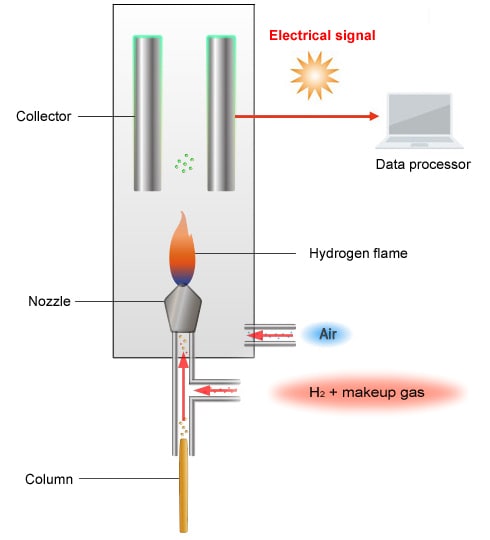 Schematic Diagram of the TCD 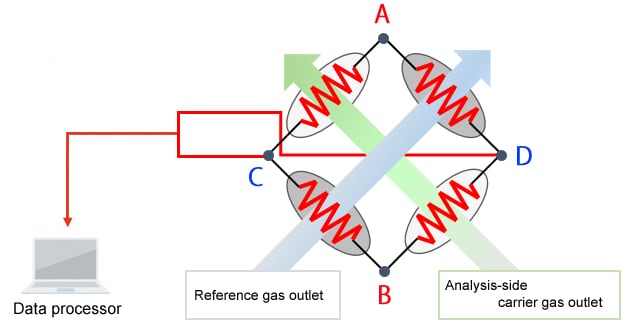 • Components are eluted from an analysis-side column.
-A change in filament temperature occurs, which
-Changes the resistance value, and
-Changes the voltage between C and D

Schematic Diagram of the BID

The principle of detection used by the BID is as follows.
The BID generates a stable He plasma, uses the energy emitted by the excited He to ionize compounds, then attracts these ions to a collector. The He plasma energy emitted is extremely high and capable of ionizing all compounds other than He, which is used to create the plasma, and Ne, which has extremely high ionization energy. As a result, the BID can detect any compound, in principle, other than He and Ne. 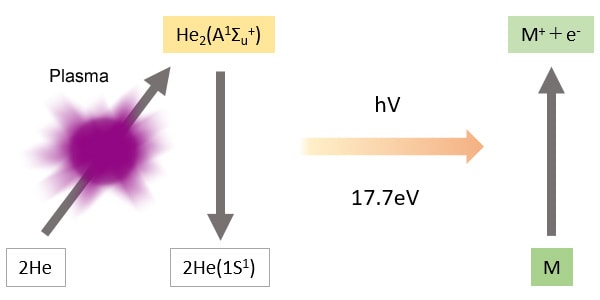 Compounds eluted from the column are ionized by light energy from the plasma.
-Ions are attracted to the collection electrode and output as peaks.

The light energy from the He plasma is 17.7 eV (electron volts), which is extremely high.
-The BID is capable of high-sensitivity detection of all compounds other than the plasma gas He, and Ne, which has a higher ionization energy than He.

Schematic Diagram of the ECD

The principle of detection used by the ECD is as follows. The ECD detects ions by reading the change in voltage value that maintains a constant ion current gathered at the collector. 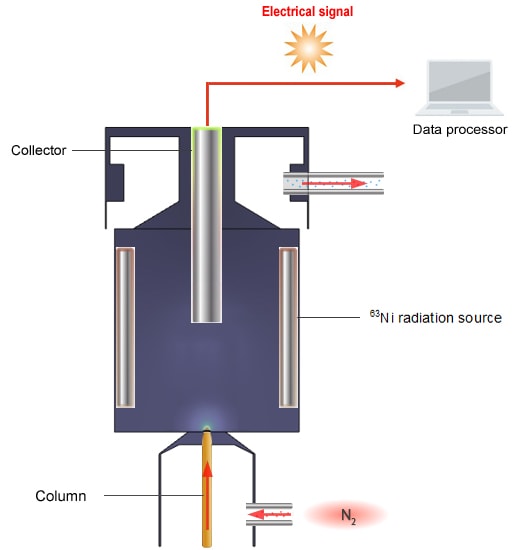 N2, which is used as the carrier gas, is ionized by β waves emitted from the 63Ni radiation source.

When an electrophilic compound is placed in this equation,
PCB + e- → PCB-

PCB- is much larger and heavier than e- and so takes more time to reach the collector.
-A higher voltage is needed for a constant ion current to flow.

Schematic Diagram of the FTD

The principle of detection used by the FTD is as follows. The FTD detects ions by reading the change in ion current gathered at the collector. When a current is passed through the platinum coil with an alkali source attached to the coil (rubidium salt), the coil increases in temperature, which creates plasma around the alkali source.

Rubidium radicals (Rb*) are generated within this plasma.
-Capable of oxidizing CN and organic phosphorus compounds
-PO2 reacts with Rb* as shown below, creating ions.

Schematic Diagram of the FPD 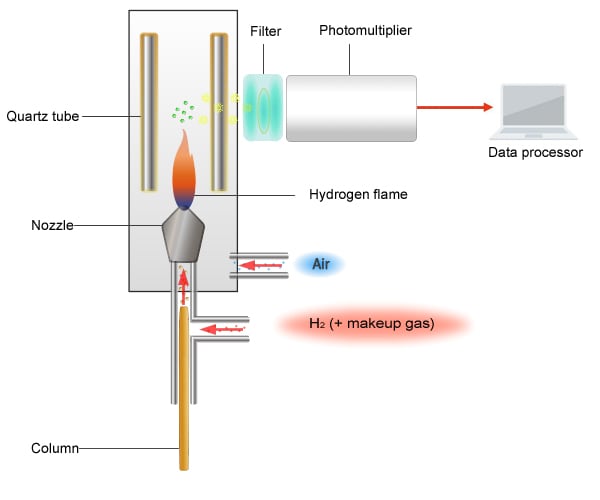 Schematic Diagram of the SCD

The principle of detection used by the SCD is as follows.
The sulfur chemiluminescence detector (SCD) uses the chemiluminescence reaction caused by ozone oxidation.
Sulfur compounds are converted to an X-S chemical species (mainly SO) that is capable of exhibiting chemiluminescence inside an extremely high temperature (around 1000 °C) oxidative-reductive furnace. The X-S chemical species is carried to the detector area where ozone converts it into an excited-state SO2* (radical). The SO2* emits light upon returning to its base state, and the SCD detects the sulfur component by measuring this light with a photomultiplier tube. 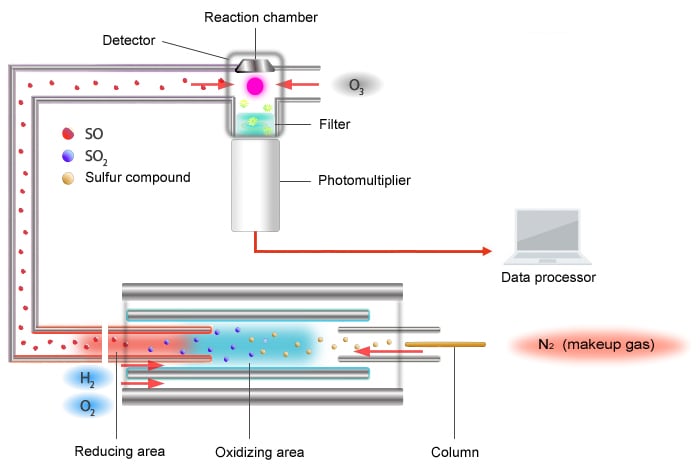