What is Gas Chromatography?

What is Gas Chromatography? (GC)

Gas chromatography (GC) is an analytical technique applicable to gas, liquid, and solid samples (components that are vaporized by heat). If a mixture of compounds is analyzed using GC system, each compound can be separated and quantified.

When a mixed solution sample is injected into the GC system, the compounds contained in the sample, including the solvent components, are heated and vaporized within the sample injection unit.

With GC system, the mobile phase, referred to as the carrier gas, always flows in sequence from the sample injection unit to the column, and then to the detector. The target components that were vaporized in the sample injection unit are transported by the carrier gas to the column. Once in the column, the mixture of compounds is separated into the various components, and the amount of each compound is then measured by the detector.

The detector converts the amount of each compound into an electrical signal, and sends these signals to a data processing unit. The data obtained enables determination of the compounds contained in the sample, and in what amounts.

The configuration of a GC system is very simple. There are three main GC system components: the sample injection unit, which heats the liquid sample and vaporizes it; the column, which is used to separate each compound; and the detector, which detects the compounds and outputs their concentrations as electrical signals. 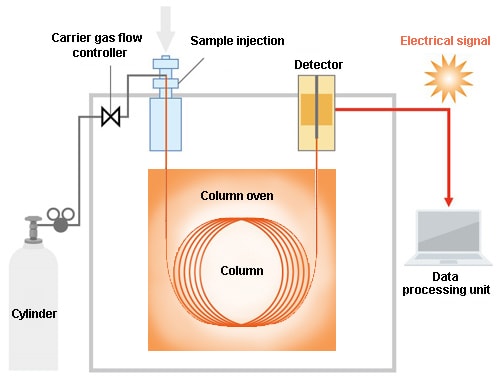 Separation by GC occurs within the column.
The sample containing multiple compounds is injected into the column together with the mobile phase. (In GC, the mobile phase is a gas referred to as the carrier gas. He is frequently used.) Both the sample and the mobile phase travel through the column, but the rate of progression within the column differs depending on the compound. Accordingly, differences arise in the times at which the respective compounds arrive at the column outlet. As a result, a separation between each compound occurs.
The row of peaks drawn when the electrical signals output from the GC detector are plotted on the vertical axis and the elapsed time after sample injection is plotted on the horizontal axis is called a chromatogram.
The components passing through the column are transported by the mobile phase (gas phase) while being partitioned from and adsorbed into the stationary phase (liquid phase and solid phase). 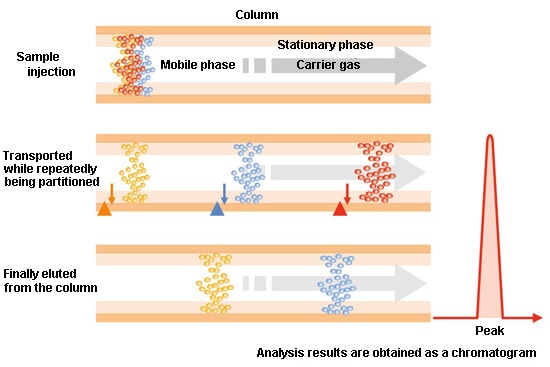 A typical chromatogram is shown here. The horizontal axis shows the time until the component reaches the detector. The vertical axis shows the signal intensity. The part at which nothing is detected is called the baseline, and the part where a component is detected is called a peak. The time from when the sample is injected into the system until the peaks appear is called the retention time. As the elution times for each component differ, each component can be separated and detected. 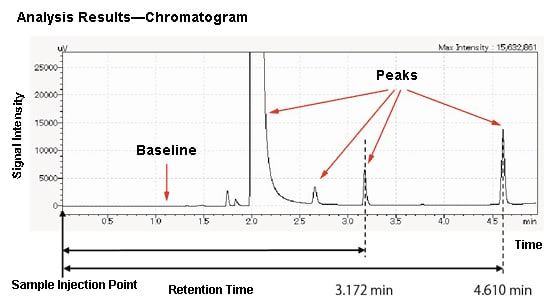 Components that can be analyzed with GC have the following three main features.

2.5. Compounds That Cannot Be Analyzed or Are Difficult to Analyze with GC

Compounds That Cannot Be Analyzed

Compounds That Are Difficult to Analyze