High Performance Liquid Chromatography (HPLC) is a process of separating components in a liquid mixture. A liquid sample is injected into a stream of solvent (mobile phase) flowing through a column packed with a separation medium (stationary phase). Sample components separate from one another by a process of differential migration as they flow through the column.

As bands emerge from the column, flow carries them to one or more detectors which deliver a voltage response as a function of time. This is called a chromatogram. For each peak, the time at which it emerges identifies the sample constituent with respect to a standard. The peak’s area represents the quantity. 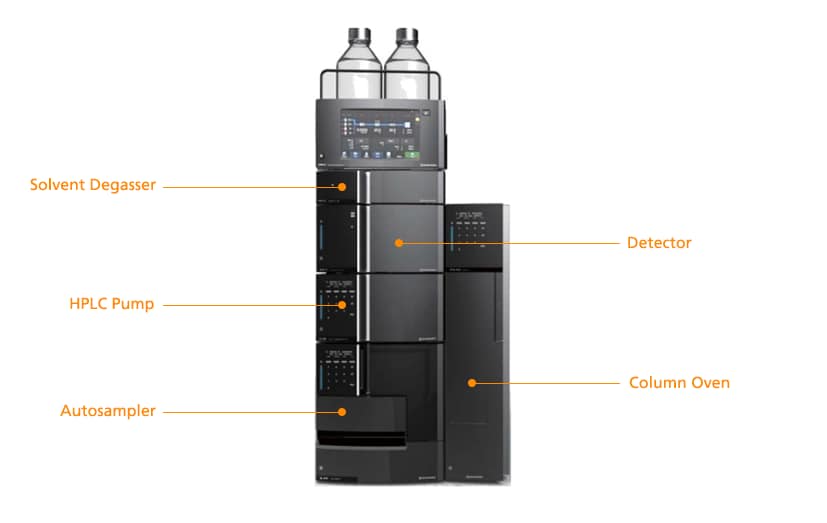 Autosampler – draws samples from vials and injects them into the solvent flow provided by the pump.

A single channel pump which requires the user to pre-mix the mobile phase. Composition remains constant with time.

A 4 channel pump which creates mixtures of separate solvent channels under software control. Mixing is done before the pump heads. Composition may be changed with time.

A 2 channel pump which creates mixtures of 2 solvents under software control. Mixing is done after the pump heads. Composition may be changed with time. 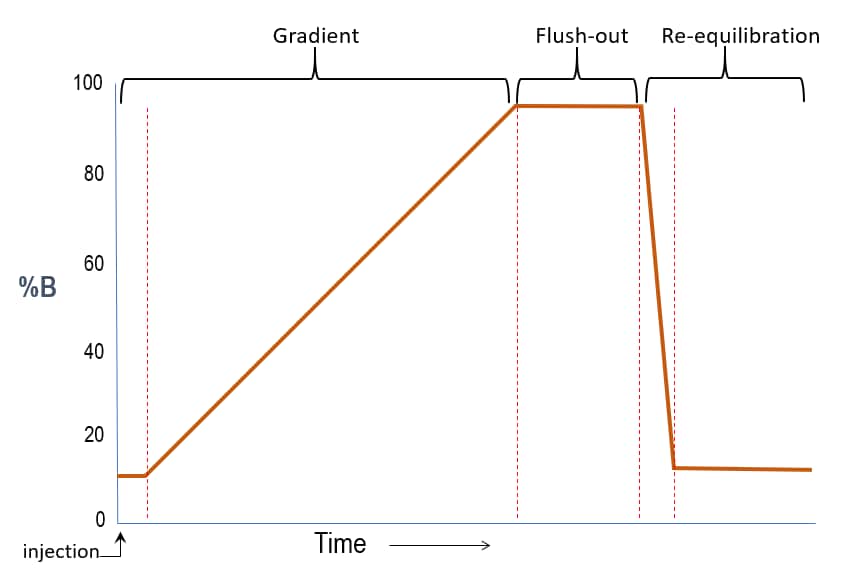 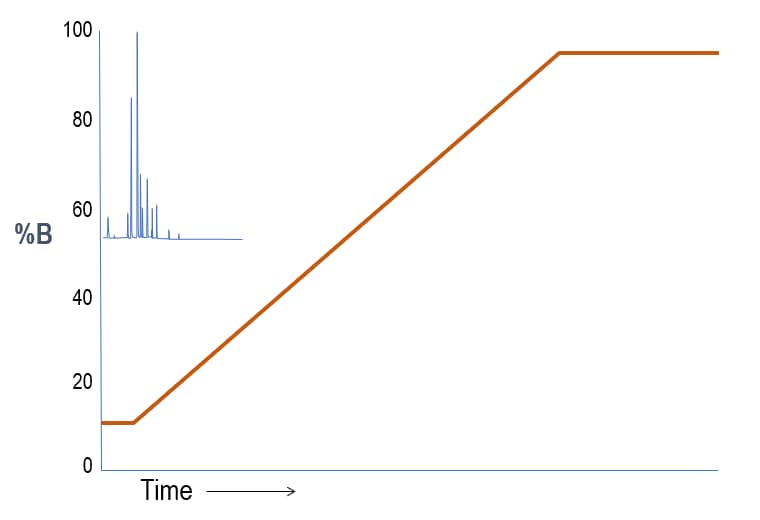 Interpretation: For a reversed phase LC column where A is water and B is organic, this first run shows sample constituents that are all polar. So, the separation is poor because the substances experience little partitioning on the stationary phase. In other words, the weak, starting solvent condition brings the sample constituents off too early. 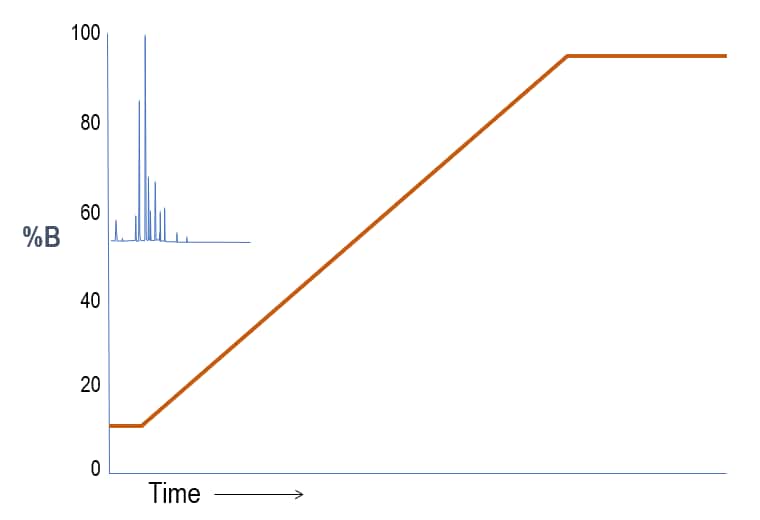 To cause the substances to partition more into the stationary phase, we reduce the slope of the gradient so that the mobile phase strength does not increase as quickly. The substances retain longer and begin to separate from one another. Notice that we still “flush” the column with strong solvent at the end of the run to effectively clean the column. 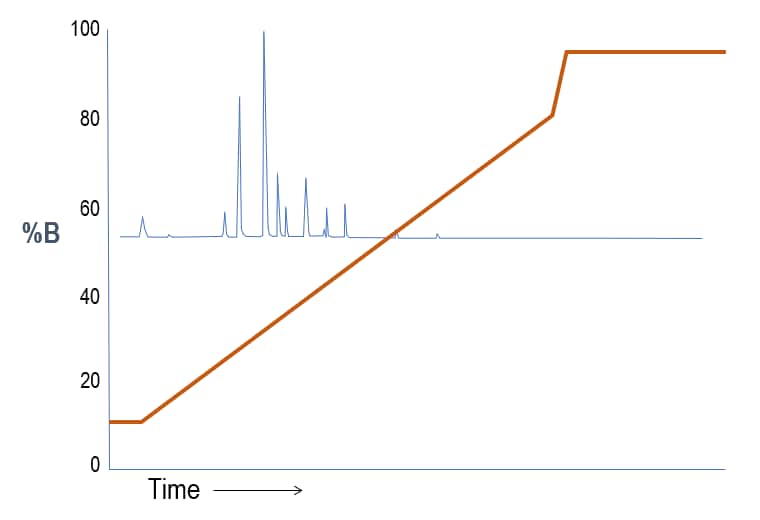 We reduce the gradient slope again until we begin seeing a good separation within the time frame.

>> UV vs Diode-Array (PDA) Detectors for (U)HPLC - a comparision 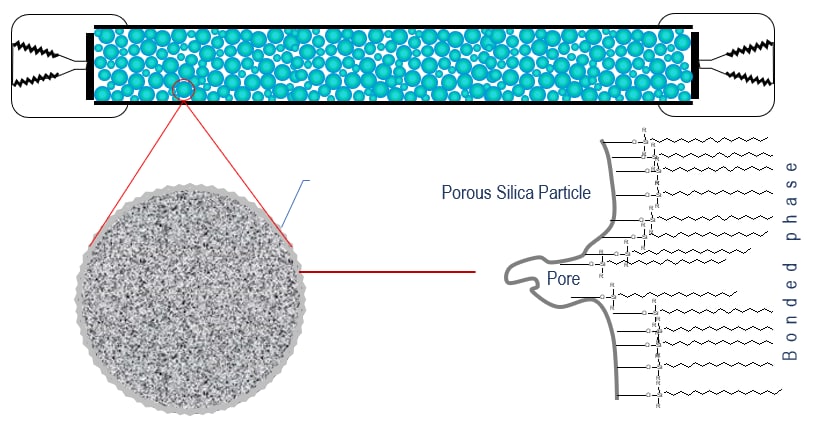 Considerations When Choosing a Column

The decision of a “best” stationary phase for a separation should be based on sample solubility and the chemical differences between the sample constituents.

The decision about the dimensions of the column should be based on the goals for the chromatography.

The best choice may be a compromise of different goals!

The Chemistry of Bonded Phases 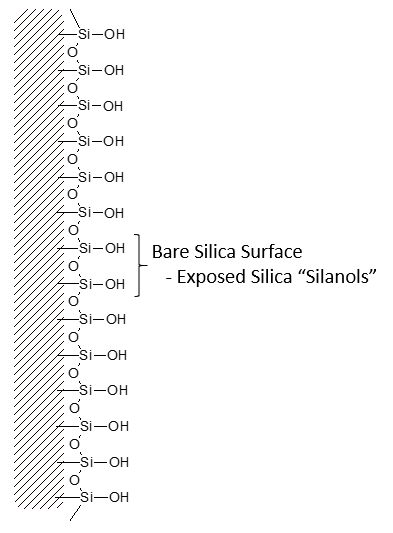 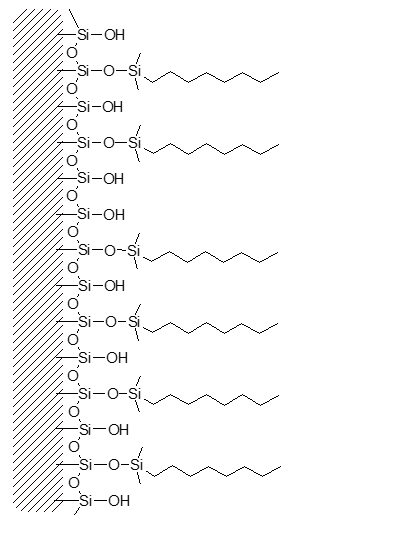 Through chemical reaction, attachment of the primary bonded phase is achieved.

Manufacturers refer to the amount of bonded phase coverage in terms of %Carbon load.

Much of the silica surface remains unreacted – some surface silanol groups are still exposed. 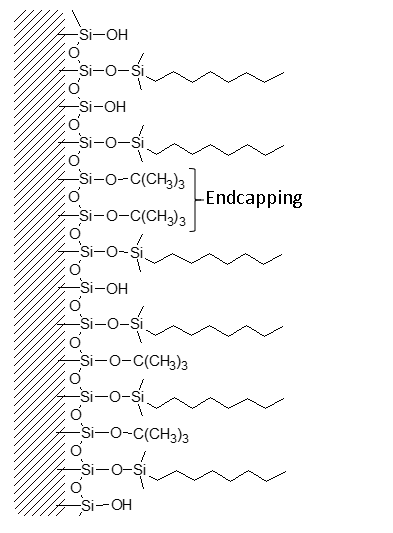 Frequently, a secondary bonding step intruduces smaller “end-cap” molecules between the primary bonded phase strands.  These endcaps may be polar or non-polar.

Different columns of the same bonded phase type will differ in silanol exposure and end-capping, resulting in a range of different overall polarities and different separating ability. 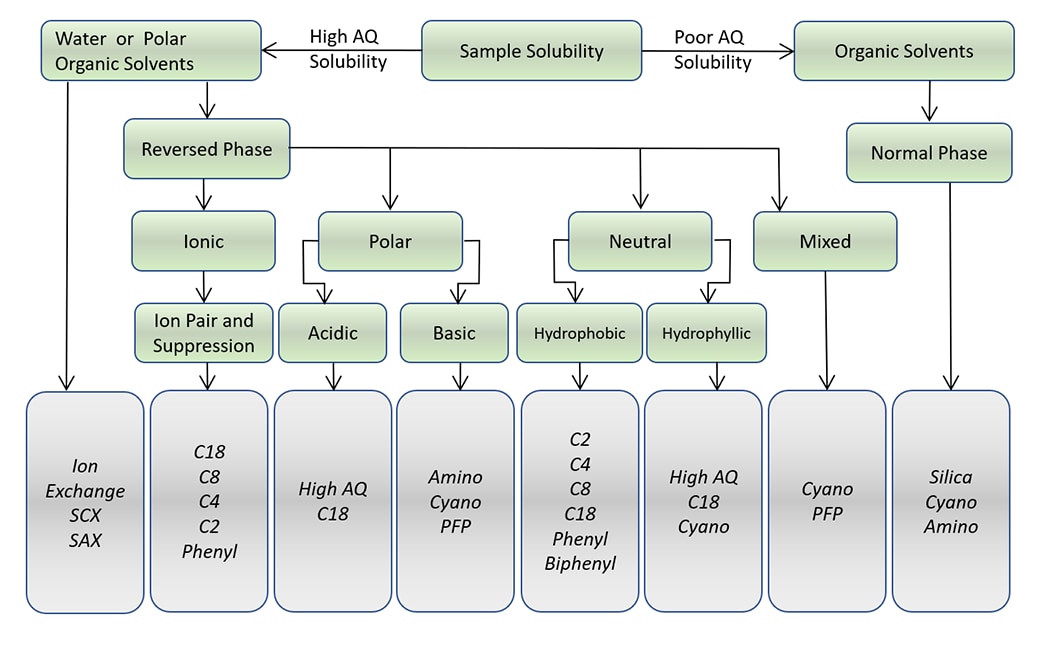 The Phenomenon of Hydrophobic Retention

So-called reversed phase columns have a bonded phase on the surface of the silica particles which is hydrophobic in nature.  Examples are C30, C18, C8, C4.

For a reversed phase column, use a combination of solvents which give an overall “greater” polarity (less hydrophobic) than the stationary phase.  In this way, the sample constituents have a reason to be attracted to the stationary phase (column bonded phase) and resist the tendency to flow with the mobile phase (solvent).

Use the “weakest” or most polar condition necessary to differentiate between sample constituents as they migrate through the column.

Examples of common mobile phase solvent pairs are Acetonitrile/Water and Methanol/Water. Changing the ratio of organic/water changes its overall polarity.

The following molecules are easily separated on a reversed phase C8 column using 50/50 Acetonitrile/Water. The polar alanine will elute first from the column followed by the non-polar terphenyl.