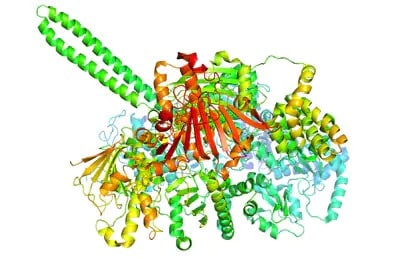 In recent years, there is a significant surge in the market of biopharmaceutical products due to their popularity as alternative solutions for many chronic diseases. Of the top 10 drugs in all pharmaceuticals sold worldwide in 2015, seven were biomedicines. And every year, the catalog of biomedicines in research is growing broader. In contrast to conventional medicines, referred to as "low molecular drugs," which are produced through chemical synthesis, biomedicines are often produced through a biological synthesis which can add layers of complexity to the process and final product.

Many of them are proteinaceous drugs and antibody drugs developed and manufactured using biotechnologies including genetic recombination, cell fusion, and cell culture. Included in this group is the most widely known biomedicine, the Monoclonal antibody. A mAb is a highly complex biological macromolecule with specific therapeutic effects. It is produced from live cells in extremely complicated culture conditions. Quality control of biopharmaceuticals is a critical step to elucidate any alteration in the primary structure as compared to the reference product. Some of the essential attributes for characterization of mAbs and possible biosimilars include peptide mapping and sequencing analysis of C-terminal and disulfide-bonds linked peptides, glycosylation, and oxidation.

With the high level of complexity in biological synthesis, many analytical techniques are employed to monitor both the progress and final product. Shimadzu offers a wide array of analytical technologies and workflows to enable the bioprocess and bioanalytical scientists to meet their challenges. 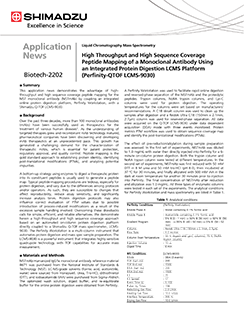 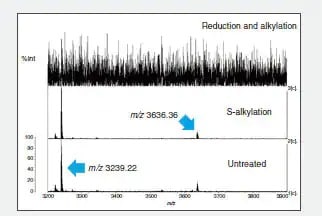 Introduced here is the analysis using a combination of peptide mapping and mass spectrometry. This method involves digesting the target protein in a proteolytic enzyme such as trypsin under various conditions and comparing the molecular weights of the generated peptide fragments with the theoretical values. The test procedures and results for the analysis of human lysozyme are introduced. 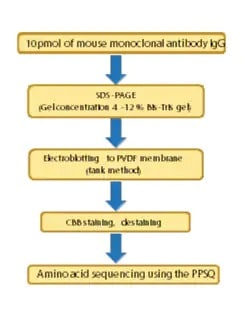 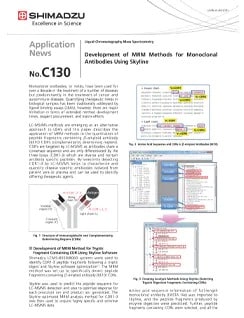 LC-MS/MS methods are emerging as an alternative approach to LBA’s and this paper describes the application of MRM methods to the quantitation of peptide fragments containing β-amyloid antibody (6E10) CDR’s (complementarity determining regions). CDR’s are targeted by LC-MS/MS as antibodies share a conserved sequence and are only differentiated by three loops (CDR1-3) which are diverse and contain antibody specific peptides. By selectivity detecting CDR1-3 by LC-MS/MS helps to characterize and quantify disease specific antibodies isolated from patient sera or plasma and can be used to identify differing therapeutic agents. 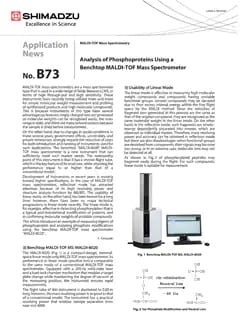 Development of instruments in recent years is moving toward higher specifications. In the case of MALDI-TOF mass spectrometers, reflectron mode has attracted attention because of its high resolving power and structure analysis function by MS/MS. The usability of linear mode, on the other hand, has been known for a long time; however, there have been no major technical progressions in linear mode recently. The linear mode is, for example, effective in detecting phosphorylation that is a typical post-translational modification of proteins, and in confirming molecular weights of unstable compounds. This article introduces an example of measuring digests of phosphoprotein and analyzing phosphate modifications using the benchtop MALDI-TOF mass spectrometer "MALDI-8020". 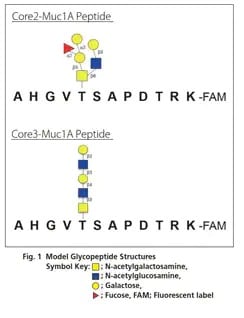 In this article, we present a method for determining the O-linked glycan binding site that uses partial digestion with multiple enzymes and the MALDI-7090 high- resolution MALDI-TOF MS.

X-ray diffraction analysis and NMR are widely used for the structural analysis of proteins. However, infrared spectrophotometry is used for the secondary structural analysis, such as α-helices and β-sheets. As infrared spectrophotometry makes it easy to measure samples in all forms (solid/liquid and crystalline/non-crystalline), it is used to complement the analytical methods mentioned above. 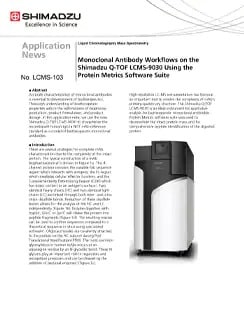 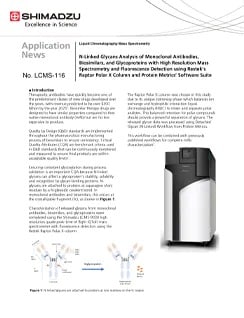 The Shimadzu LCMS-9030 has shown excellent mass accuracy for N-linked glycans on several proteins. The Restek Raptor Polar X, an innovative hybrid ion-exchange/HILIC column, is an ideal column for glycans as reflected by the baseline separation of the structurally similar N-glycans. Protein Metrics Glycan Workflow offers additional workflows to other published methods.