Inductively Coupled Plasma-Atomic Emission Spectrometers (ICP-AES) is one of the most popular instruments in environmental labs because a single method/analyzer is capable of running almost every metal in a large number of samples per day. ICP spectrometers offer very high throughput and capable of multiple reportable results per run. ICP-AES is suitable for almost every element, excluding halogens and inert gases, and are especially useful for refractory elements, such as silicon, aluminum, barium, etc., that perform poorly by flame AA. Samples are usually aqueous and aspirated into a nebulizer. Method development is relatively easy; you can get by with analytical grade reagents. Once a method is set up, most lab personnel can easily run samples. The biggest drawback is lack of sensitivity for some elements, and physical and spectral interferences. 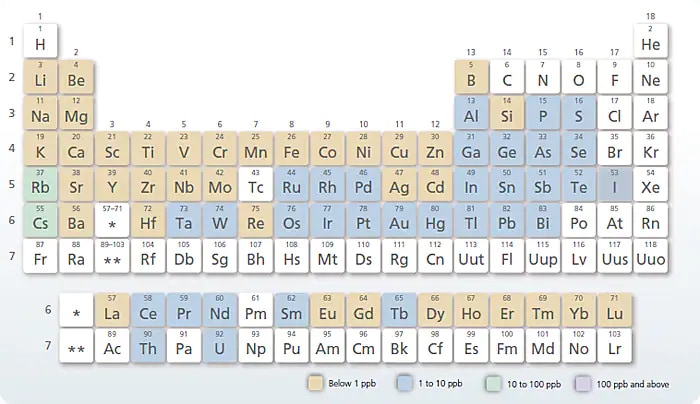 The Shimadzu ICPE-9820 is a simultaneous instrument that splits light in two dimensions, measuring all wavelengths at once on a CCD chip. This enables measurement at any wavelength at both high and low concentrations. It is very high speed. All elements amenable to ICP (up to the 72 in the chart above) can be analyzed in 1-2 minutes. Simultaneous instruments are the best ICP-AES technique for environmental testing because of their lower cost and higher throughput. However, they do suffer from inter-element interferences, and therefore require high-resolution chips and mathematical treatment of data to compensate for interferences. 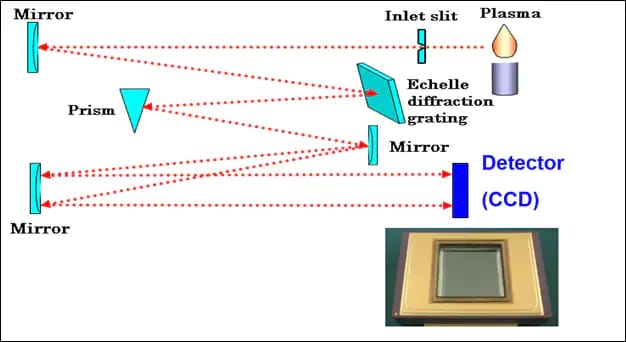 Every ICP has a source, or plasma, optics to split the light into its various wavelengths, and a detector to measure each specific wavelength and its intensity. The position of the light on the detector determines its wavelength and the intensity is proportional to concentration. To get the sample into the plasma it must be nebulized. Nebulization creates very small droplets that are carried by the argon carrier gas into the plasma. To do this, the sample is aspirated, or pumped into a nebulizer. It enters a spray chamber that removes the largest droplets. Only a fine mist containing about 1% of the sample aspirated makes it into the plasma. 99% of the sample aspirated goes down the drain. 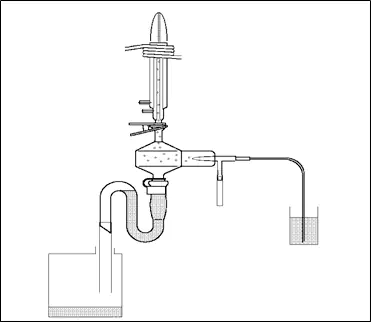 You can increase the amount of sample to the plasma; however, there are always tradeoffs. High dissolved salts in the sample can clog the nebulizer, and with every sample there are always elements you may not be interested in that can interfere. Plasma is gaseous argon at about 10,000 C. Elements that are carried into the plasma ionize. In ICP emission, the photons emitted during ionization are measured. The wavelength (or energy) of the photon is specific to the element ionized. The number of photons emitted is proportional to the number of atoms that make it to the plasma (concentration).

The plasma torch consists of three tubes, usually made of quartz. There is an outer tube, a middle tube, and the sample injector. Argon gas passes between the outer tube and the middle tube and swirls around in a spiral flow. A second stream of argon, at a much slower flow rate, passes between the middle tube and the sample injector. This second gas stream, also called auxiliary gas, changes the position of the plasma relative to the injector. A third gas flow, the nebulizer gas, carries the sample through the injector and into the plasma. This stream makes a tunnel through the center of the plasma. Although argon is usually used, other gases can be used for specific purposes.

A load coil connected to a Radio Frequency (RF) generator surrounds the top of the torch. When power is applied (usually about 1100 W), an alternating current oscillates at the frequency of the generator (27 or 40 MHz). The oscillation of current creates a magnetic field in the area inside the coil at the top of the torch. With argon flowing through, a high-voltage spark ionizes some of the argon. This causes a chain reaction within the magnetic field, breaking down the argon gas to contain argon gas, argon ions, and electrons. This is an inductively coupled plasma. The viewing area for ICP emission work is somewhere between the 6500C and the 6000C.

To summarize, samples in a liquid (usually aqueous) state are introduced into a plasma. Elements in the sample ionize and release radiation. The wavelength of the radiation is specific to the element. The intensity of the radiation is proportional to the concentration.

Traditional ICP, or method 200.7, uses a radial view. The newer method, Method 200.5, is an axial view method. CFR 40 Part 136.6 allows both axial and radial viewing for EPA 200.7 in wastewater. Because of its longer viewing path, axial view has better detection limits. It also suffers from more interferences and is not as linear. Radial view has fewer interferences and a large dynamic range. If your samples will always be of concentrations high enough, then get an instrument with only a radial view. Otherwise, get one with dual view.

The Shimadzu ICPE-9800 series simultaneous ICP-AES splits light emitted by the plasma first into one dimension, at a grating, and then splits again vertically, creating a two-dimensional pattern that covers as much of the detector surface as possible. The position of light hitting the detector determines the wavelength and the intensity is proportional to concentration. 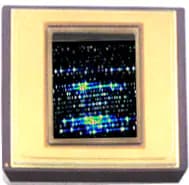 The Charge Coupling Device (CCD) chip with emission spectra illuminated on it. The chip is large enough to record the entire spectra with over one million pixels for the highest resolution. This high-resolution chip provides better separation of wavelengths, minimizing spectral interferences. 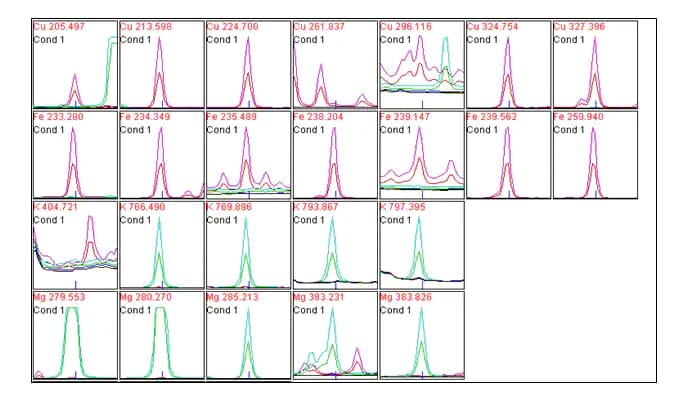 The software processes the spectra as individual peaks. These are emission spectra. You do not integrate peaks. You measure peak height at the maximum.

A calibration curve created by measuring the maximum intensity for each standard at the peak maxima. 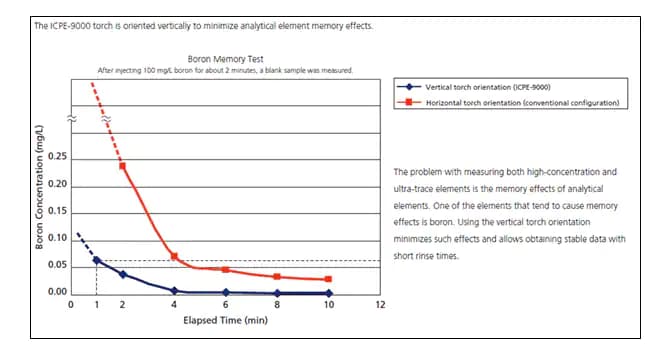 To measure at the lower wavelengths, you cannot pass spectra through air. You must either purge the optics chamber with argon gas or empty it using a vacuum. The figure below shows an advantage of vacuum purge as it relates to start up time. 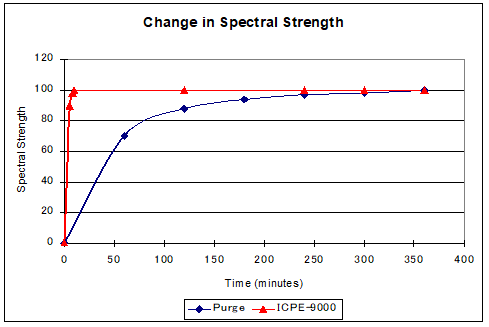 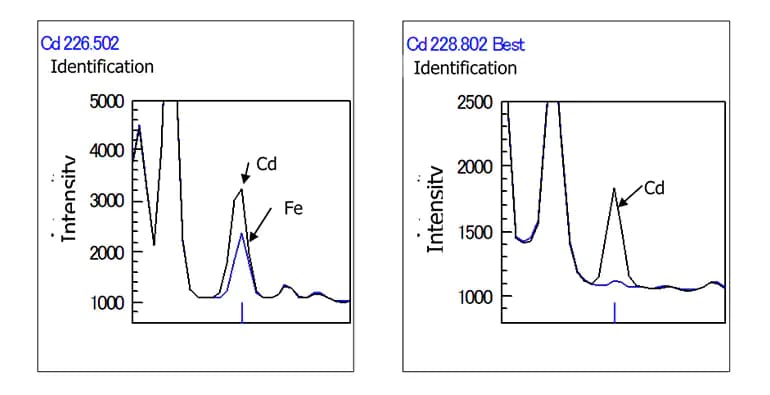 An example showing the spectral interference of iron on cadmium; if iron is in the sample, you cannot trust a cadmium result at 226.502 nm. However, the ICPE-9800 software warns you that Fe interferes and tells you that the 226.502 result is likely incorrect. It suggests you use the 228.802 result. Alternatively, it can perform an Inter-element correction based on an analysis of pure iron standards. These corrections can be made after the sample was run