High performance liquid chromatography is used for separating and analyzing organics in a mixture. It has an advantage over gas chromatography methods because you can run compounds in water samples with very little sample preparation. HPLC has been used in laboratories for over 30 years. A common environmental laboratory method is the analysis of carbamate pesticides.

In LC, the carrier is the mobile phase. The mobile phase is a single solvent, a mixture of solvents, or a variable mixture of solvents over time, called a gradient. The solvent selectively dissolves sample components injected and adsorbed onto a column to give you peaks. The mobile phase is pumped into very narrow bore tubing, resulting in very high pressures. The narrower the tubing, the higher the pressure. Dissolved air in the mobile phase can lead to noise and drift in the baseline. Ultrasonic degassing with vacuum gives the best results. Helium sparging replaces air in the reagent with inert gas. Ultrasonic degassing creates nucleation sites where bubbles can form and escape from liquid.

The purpose of the pump in an HPLC is to provide a constant, reproducible supply of mobile phase to the column. The mobile phase enters a mixer. If it is not properly mixed, you will not get reproducible separation and elution from the column. A mixer is required in all instances when more than one solvent is used as mobile phase. This is to ensure sufficient mixing of all compounds before being introduced to the column. Factors to consider when choosing a mixer: flow rate, solvents used, and type of detector. The mixed mobile phase passes through a valve. It is at this valve where sample is loaded into a loop. The valve turns and the mobile phase carries the sample into the column. An HPLC injector is a high-pressure valve. You fill a fixed volume loop. This is contrary to GC methods where you are injecting sample through a septa into a carrier gas stream. Both manual injectors and auto-samplers use 6-port rotary valves to aspirate (load) and dispel (inject) sample.

Depending on the analyte and the composition of the mobile phase, the analyte elutes from the column to pass through a detector´s flow cell. The column is specially made to retain analyte. The analyte elutes in a very reproducible order at very reproducible times. The elution time determines the analyte's identity. The intensity at the detector is a function of concentration. Once the solution passes through the detector, it either travels to another detector in a series or goes to waste.

A column oven provides a temperature-controlled environment during the separation process. The oven also plays an important role in controlling the quality and time for analysis 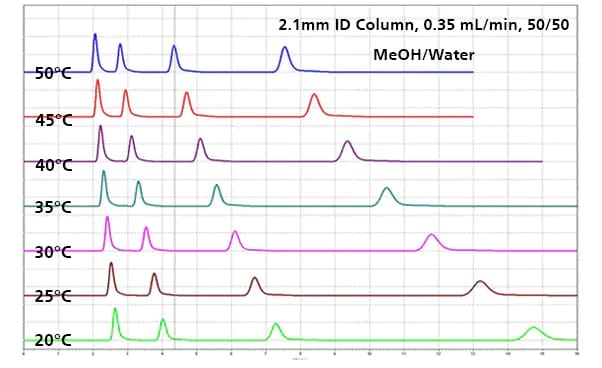 The detector continuously monitors the baseline as it passes through a flow cell. Detectors measure some characteristic of the analytes you are looking for, and do not measure non-analytes in the matrix. The type of detector varies according to the method. In EPA methods, there are only a few HPLC detectors commonly used.

The most common LC detectors for environmental analysis are UV absorbance, fluorescence, and mass spectrometry. A UV detector can be used to measure PAHs. Essentially, any compound that absorbs light at the selected wavelength is measured. A fluorescence detector is used to measure carbamates after a post-column derivatization. It can also be used for more sensitive detection of PAH.